The Different Types of Gender Identities

The Different Types of Gender Identities you may want to know. Often, in the presentation day world, the words “gender” and “sex” are used interchangeably. The reality is that “gender” and sex” do not mean the same thing. 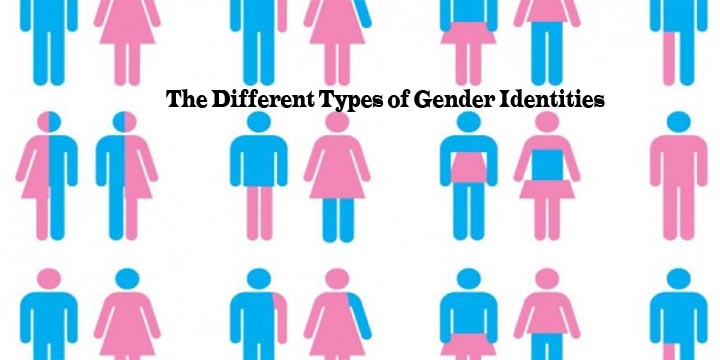 The word “gender” expresses how a person identifies on the inside, meanwhile, “sex” is determined by genetics and biological factors. This means that only the person themselves can identify their gender.

A person’s sex and gender do not have to be the same thing. Gender identity is a personal perception of an individual’s own gender.

It is important to know the difference between gender and sex.

Your gender means how you identify internally and express externally. People often show these expressions with their clothing, behaviors, and associations.

However, gender is not nearly divided into the lines of man and woman.

Sex on the other hand is how a person is identified based on some biological factors like reproductive organs, genes, and hormones.

Surprisingly, sex is not also binary. A person may Identify with being male or female but their reproductive organs, hormones, or genes may be different.

Therefore, people use the words “male”, “female” and “intersex” to refer to a person’s sex.

This referral is to the personal sense of the individual’s own gender.

This refers to how a person expressed themselves to others or how they want the world to see them. This could be wholly masculine or wholly feminine, androgynous or nonbinary.

What are the Different Gender Identities?

Below are the presently recognized gender identities

These types of people do not identify with any particular gender, or they may have no gender at all.

A person who identifies as a bigender has two genders. This type of people often displays cultural masculine and feminine roles.

“Butch” is a term specifically used by Lesbians to express their masculinity. However, the LGBTQIA Resource Center has stated that “butch” can also be a gender identity in itself.

A Cisgender is a person who still identifies with the sex they were given at birth.

This includes people who are transgender or people whose gender broadens the surrounding society’s notion of what gender is.

People who identify as gender fluids are people whose gender identity shifts between or outside society’s expectations of gender.

This is a person who refuses to allow society’s definition of “male” or “female” to define them.

A person who identifies as genderqueer has a gender identity or expression that is not the same as society’s expectations for their assumed gender.

Genderqueer can also refer to a person who identifies outside of how society defines gender or someone who identifies with a combination of two or more genders.

This is usually a lesbian or a trans person who leans more toward masculine performances and experiences of gender.

A person who identifies as nonbinary does not experience any gender within the gender binary. People who are nonbinary may also experience overlap with different gender expressions.

This term refers to a person who experiences and possesses all genders.

People who identify as polygender or pangender experience and display parts of multiple genders.

This is an umbrella term that encompasses all people who experience and identify with a different gender than that which their assigned sex at birth would suggest.

Although most people think of trans men and trans women when hearing the word transgender, this term also encompasses people who identify as a gender other than man or woman, including nonbinary and genderfluid.

Trans is a term that describes nonbinary and those who are genderless, according to the LGBTQIA Resource Center.

Two-Spirit is an umbrella term that encompasses different sexualities and genders in Indigenous Native American communities.

There are many different definitions of Two-Spirit, and Indigenous Native American people may or may not use this term to describe their experiences and feelings of masculinity and femininity.

This is a cultural term that is reserved for those who identify as Indigenous Native Americans.