Surface Duo Hidden Desktop Mode is no Samsung DeX. Most of the time, Samsung has been on the receiving end of being accused of doing things their own way, sometimes diverging significantly from the typical Android experience. 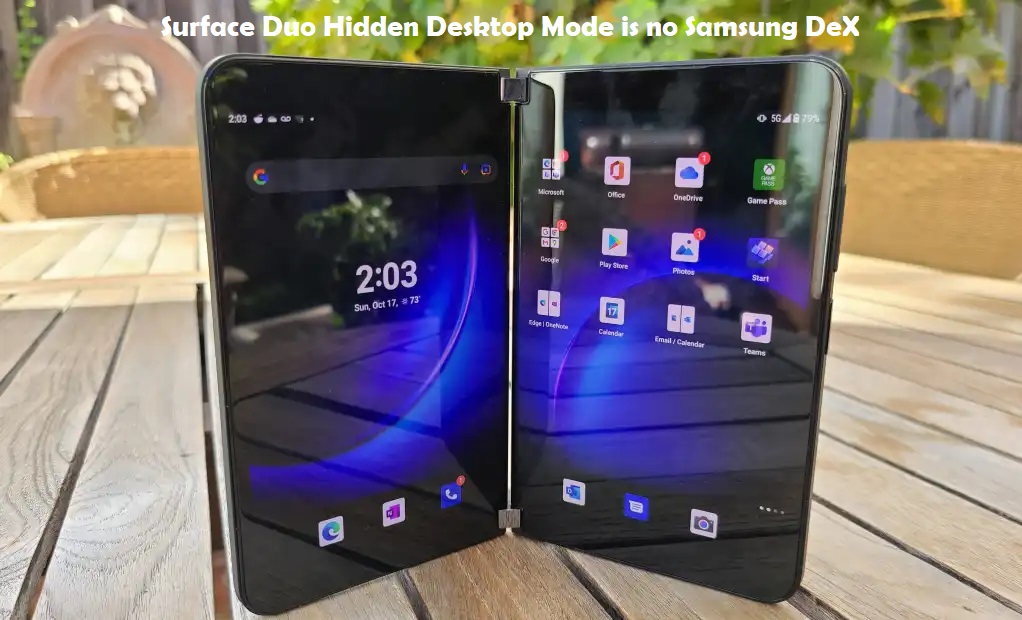 While the criticism includes some good points, The company should be at the receiving end of the credits for bringing in new features that would eventually influence the much bigger android market, also.

Starting from split screens to windowed apps to desktop modes, According to SlashGear,  Samsung has done quite a great job, and often before these types of features were officially introduced in Android. Now it seems like Microsoft would be able to pull that off too but the implementation in its Surface Duo devices definitely needs some work.

Although some developers and manufacturers have been long trying to shoehorn Android right into desktops and laptops, their efforts were supported on Android 10 by Google. Even then, however, this “desktop mode” was designed only for developers to test android apps, not for creating a complete desktop experience.

Android 12L would be working to improve the flexibility of Android apps on any screen size, but the foundation remained there for quite some years.

Apparently, the last Android 11 update to the original Surface Duo brought about unlocking the capability, which OnMSFT says would also be available on the Surface Duo 2. Making use of the desktop mode, users would be required to enable Android’s Developer Mode. In other to do this, open the Settings app, head to the about section, and tap the build number seven times.

Samsung DeX is The Best

Once enabled, you would be able to connect to a monitor using a USB-C to access the desktop Mode. Any apps that are open will appear in standalone windows that you can choose to move and even resize, but that’s pretty much it. you also get to open apps that are on the Surface Duo’s screens separate from the ones that are on the external Screen.

Well, Unfortunately, the experience has been reported to be buggy and clearly not intended for regular use. It is seeming like a far cry from Samsung’s more mature DeX framework, which offers something really close to a desktop experience that is developed around android.

This is definitely a missed opportunity if Microsoft does not work to improve the feature, but then again, there are more important things it has to do first, and it includes improving the surface of Duo’s basic software experience.