Scientists create a wooden knife that is three times sharper than a steel blade. The said wooden knife cuts and slices through steaks like it will go through butter. 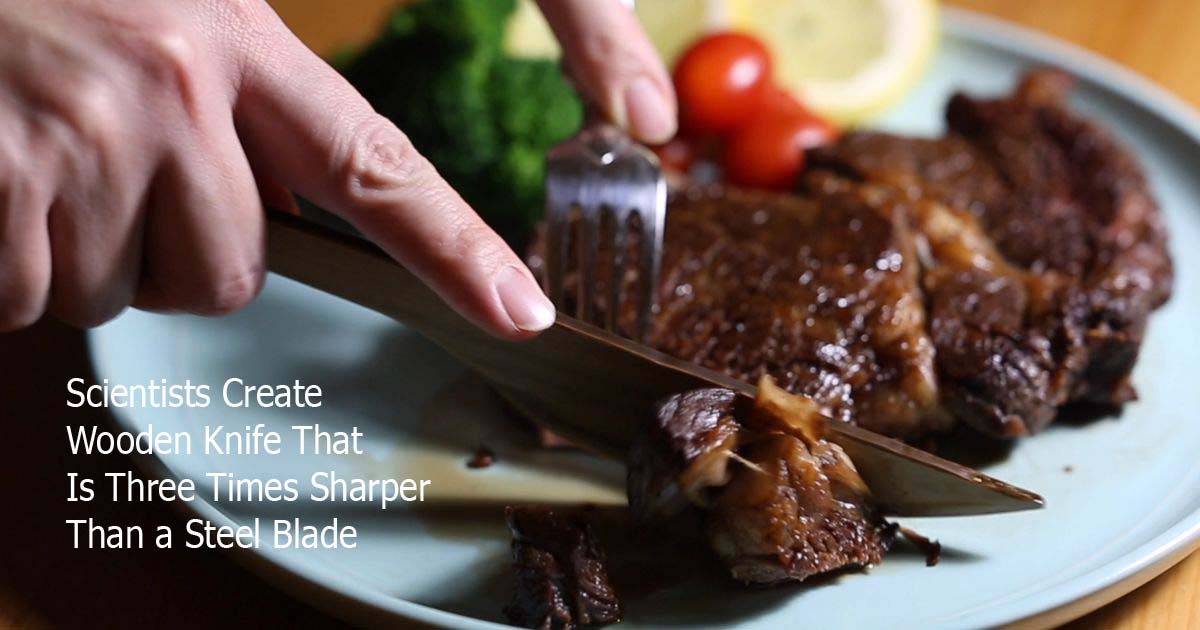 Trust me the wooden knife and forks you get with your semi-hot duck fires are rubbish excuses for cutlery. They are only good at moving food around a plate but that’s just it. Plastic on the other hand works a little better but it is not good for the planet. There are also the knives that are made from frozen human feces and everyone knows how poorly they cut through meat.

The standard for knives normally is steel or ceramics. In a new study however that appeared in the journal matter on October 20, material scientists described their latest creation. The creation is known as a hardened knife.

This knife can easily cut through a medium well-done steak. This is according to a materials scientist at the University of Maryland and the first author on the paper Teng Li, the creation can also be used and reused many times.

What The Team Behind The Creation Thinks

In a statement Teng Li said, “in our kitchen, we have many wood pieces that we use for a very long time, like a cutting board, chopsticks, or a rolling pin…these knives, too, can be used many times if you resurface them, sharpen them, and perform the same regular upkeep.”

It isn’t a new idea to use wood for cutlery and various food festivals will agree with that. But however, Li’s team has developed a two-step method with which to hard the wood in their knives and in the process increasing the blade’s hardness 23-fold. And to obtain this level of hardness, the wood was made to retain a higher level of cellulose.

How the Creation Was Possible

Normally woods contain 50% cellulose and this provides for some structural integrity and weaker molecules make the other part. The two-step process of Li and his team was able to remove the weaker components but also retain the cellulose. To then protect the sharpness of the wood during use and washing, it has to be coated with mineral oil.

Li’s team used a high-resolution microscope to examine the wooden knife to determine the reason it was holding so much strength and they discovered that the two-step process they used prevented the defects from showing. In a statement, Li said, “the strength of a piece of material is very sensitive to the size and density of defects, like voids, channels, or pits.”

Other Materials Experimented On

Li and his team did not stop at making wooden knives hard as they also developed wooden nails that also showed the same potentials as the conventional steel nails. It’s very impressive when you talk up the knife’s function, but the manufacturing process of it could also be important. The team notes that it could be a “renewable and low-cost alternative with the potential to replace plastic table utensils.”