The car rental company Hertz, reportedly orders 100,000 electric vehicles from Telsa in recent development. What does this mean for hertz customers then? This simply means that the customers of the company will have tons of Telsa’s to choose from. 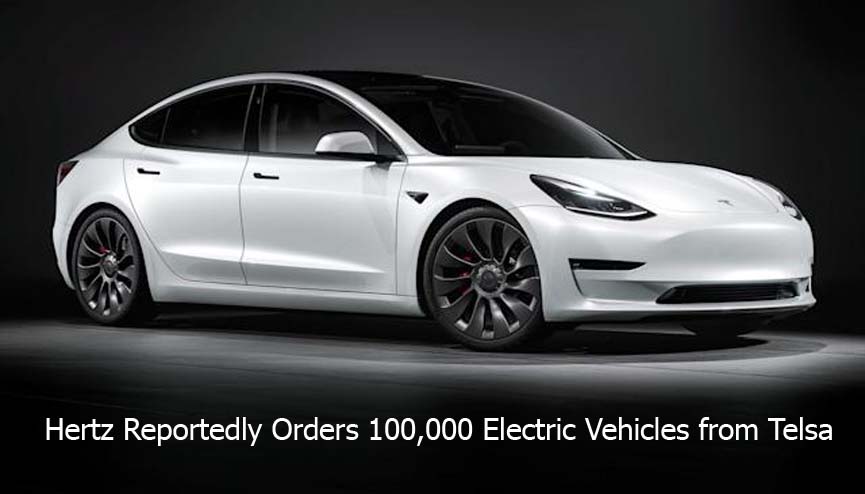 Hertz is one company that has been in the limelight recently. The company is just fresh from some restructuring and bankruptcy and also it is making some big new changes. The car rental company on Monday announced that it has already placed an order for a whopping 100,000 new electric vehicles from Telsa.

With the new development, renters will be able to choose from a fleet of Telsa’s electric vehicles. They will not only have the option of model 3, but they will also access Telsa’s supercharger network. Additionally, the hertz company will also begin the creation of its very own charging stations infrastructure. And guess what – tom Brady, a seven-times super bowl champion will be the face of an EV-themed marketing campaign.

What Hertz Had To Say About the Development

It seems like this is just the beginning of something huge for the company. Hertz, in an official statement, said that the 100,000 cars is an initial order. For the time being, the recent development could put the company ahead of its competitors in the EV market.

The Telsa Company does not make millions of cars each year so it may be difficult for another car rental company to topple hertz at the moment. And given the EV’s company production numbers at the moment with the shortage of semiconductor chips, it is impossible to challenge hertz in the market.

The car rental company’s purchase of tons of cars from Telsa does not mean it’s their strategy of solving their problems at the moment. The company just came out of bankruptcy with its new owners. The company noted that with its new structure they are not just focusing on rental vehicles, but instead will chart a new course for travel, the auto industry, and of course mobility in general.

In the announcement, the company noted also that these facets will help the company create its “modern mobility ecosystem.” The company however did not state or disclose much regarding the terms of the deal with Telsa or how the multi-billion dollar deal was being financed.

The interim CEO of hertz, Mark Fields said in an official statement that, “electric vehicles are now mainstream, and we’ve only just begun to see rising global demand and interest…the new hertz is going to lead the way as a mobility company, starting with the largest EV rental fleet in North America and a commitment to grow our EV fleet and provide the best rental and recharging experience for leisure and business customers around the world.”

When Will the EV’s Be Available for Renting

Starting from next month the first model 3 EVs will enter hertz’s fleets. After that, the model 3’s will be available for rent both in the US and Europe. And by the end of the year, hertz said that electric vehicles will make up for 20% of its fleet globally.