The former president of the United States of America’s truth social network app has been given an ultimatum to stop breaking its software license in thirty days. Truth social network reportedly has been said to have ripped of open –source platforms mastodon. 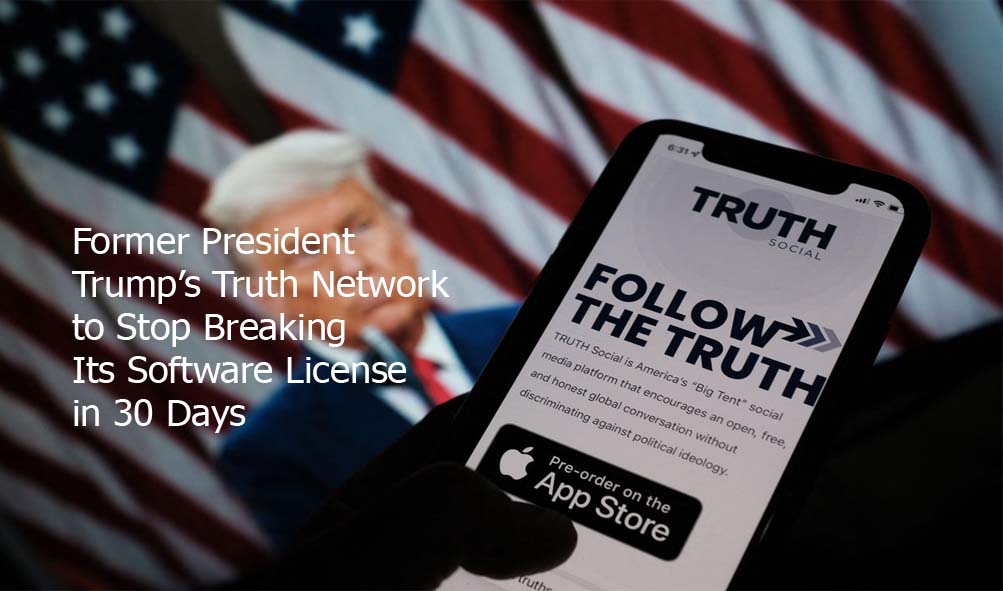 The social networking platform by Donald trump has violated a free and open-source software licensing agreement, the software freedom conservancy (SFC) reports. The network did so by tearing apart a decentralized social network Mastodon.

TMTG, the trump media, and technology group has been given a thirty-day ultimatum to comply with the laid down terms of the license else its access will be terminated. The network will also be forced to rebuild or face legal actions.

Just yesterday, the TMTG launched a special purpose acquisition company fundraising effort. The effort has promised and ensured to build a sweeping media empire. So far, the only product to have come out of the fundraising effort is the Truth social network that seems to be created from mastodon.

Anyone can make use of mastodon’s code but they will have to comply with the Affero general public license that governs the said code. One of the conditions includes offering their source code to all users. Truth social however does not comply with the license. The network in fact referred to its service as proprietary.

The developers have at one point tried to take off any evidence that would make the connection to mastodon very visible. They even at a point listed a sighting of the mastodon logo as a bug but also included direct references to mastodon in the underlying HTML of the site along with other obvious similarities that are visual.

The strategy and plan of the trump media and technology group have not gone well with the SFC. In a blog post, SFC policy fellow said that “the license purposefully treats everyone equally (even people we don’t like or agree with), but they must operate under the same rules of the copyleft licenses that apply to everyone else…today we saw the trump media and technology group ignoring thee important rules – which were designed for the social good.”

The social network by trump has not yet been officially launched but users could however get access to a test version. Many fake or prank accounts were created with even false company announcements and fake Donald trump posts. The platform however since then has been replaced by a waitlist.

SFC has however demanded that all the users on the platform be given access to the Truth social source code. Kuhn says, “If they fail to do this within 30 days, their rights and permissions in the software are automatically and permanently terminated.”

If the social network fails to comply with the SFC, it could be sued for violating the terms of the used license. The SFC group early this year has sued electronics maker Vizio for failing to keep up to the basic requirements needed for free software licensing repeatedly. Kuhn also writes that “we will be following this issue very closely and demanding that Trump’s group give the corresponding source to all who use the site.”

What Mastodon Had To Say

The founder of Mastodon, Eugen Rochko has reported that he would seek legal counsel regarding the situation. He however did not discuss a specific course of action. He also told talking points memo that “compliance with our AGPLv3 license is very important to me as that is the sole basis upon which I and other developers are willing to give away years of work for free.”