Ted Sarandos, Co-CEO of Netflix finally aggress making a mistake in defending Dave Chappelle’s comments. Initially, ted had dismissed the harm that the comedian’s jokes could actually cost the company. 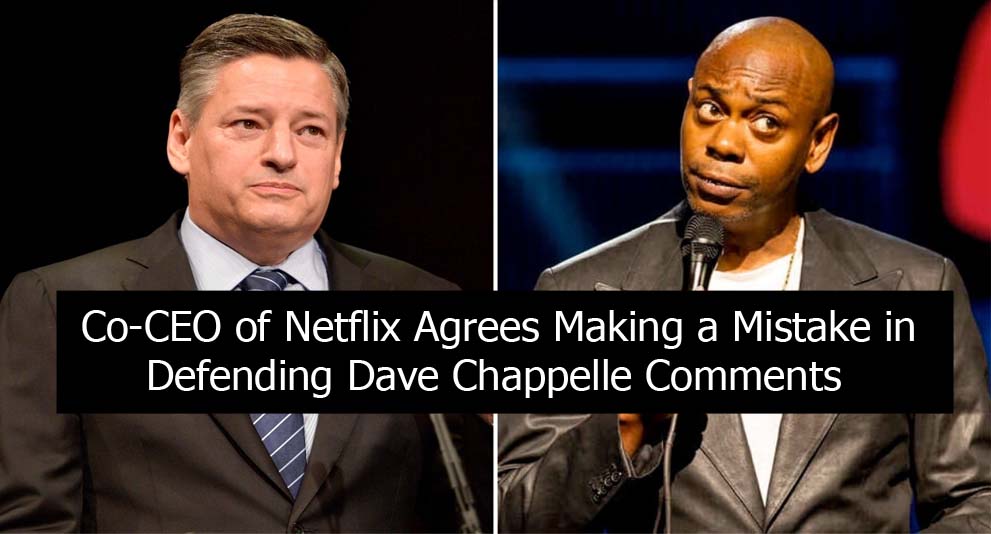 Ted Sarandos, Netflix’s CEO in an interview with the wall street journal conceded that he “screwed up” in the handling of employee response to Dave Chappelle’s special, the closer. The Netflix latest standup comedy special contained comments about transgender people, one that is viewed by many as offensive.

Originally and initially, Sarandos had defended the comedy special from various criticisms and concerns over the alleged danger the comments posed to Trans people saying “content on the screen doesn’t directly translate to real-world harm” according to an email obtained by a news outlet Variety. Also, he added that people are allowed to watch “shocking stand-up comedy” without being pushed to hurt others.

After the special was released, Chappelle’s jokes and comments about Trans people both in general and about specific persons in his personal life led to a backlash from employees. Many then pointed out the extreme fatality rates trans people faced due to violent crimes most especially if you are a colored trans person. Sarandos in an interview with the journal on Tuesday said that “what I should have led within those emails was humanity…I should have recognized the fact that a group of our employees was really hurting.”

He did not end there however citing and conceding that his previous comments regarding the matter not causing real-world harm were in error. He said, “to be clear, storytelling has an impact in the real world…sometimes quite negative.”

Remember the company last week confirmed that it had fired an employee reported for leaking internal data and information regarding Dave Chappelle’s special to the press. The name of the employee however has been withheld for personal and security reasons was a leader of a Trans employee group in the company that’s was organizing a walkout on the 20th of October. The walkout will be about a protest of the handling of Dave Chappelle’s special by the company according to a report cited by the verge.

When asked for a comment, Netflix did not respond to any additional comment. Terra Field is one of the Trans employees at Netflix who has publicly criticized Dave Chappelle’s the closer. She on Monday shared an online essay titled “it was never about Dave” on her medium blog. In the essay, she recounted a similar situation back in 2019 following the release of Daves’ previous special “sticks and bones.”

In the essay she said, “two years ago when ‘sticks and bones’ released, the black and trans-ERGs came together and held very candid and vulnerable discussions about how the transphobic content of the special contributes to a culture that marginalizes the trans community and a culture that is particularly violent towards black transgender women…two years later, ‘the closer’ released and the same conversation started again…I felt like all the work we did after ‘sticks and bones’ was meaningless and that having the exact same internal dialog and pile of emotional labor from the trans-ERG was just going to get us the same canned statement about ‘artistic freedom’ and it did.”