The 2020 United States Presidential Election is gaining more buzz as the day for the general elections draws closer. This does not come as a surprise too though as the United States of America is one of the most powerful countries in the world today. Knowing that whoever wins the 2020 presidential elections has the most control over the power of the nation.  This, in turn, affects the rest of the world. 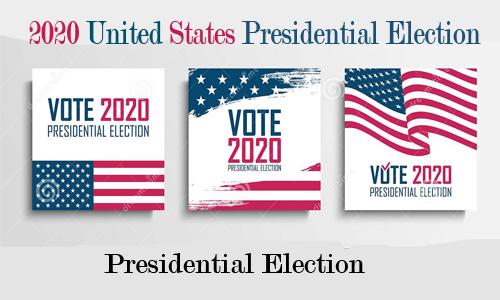 This is for a fact that this 2020 election will be the 59th quadrennial presidential election.  While the Americans are prepping to elect a new president and vice or re-elect the incumbents Donald Trump and Mike Pence, every other nation is anticipating the result and decision of America. The tension the country must be in cannot be over-emphasized as several powerful men are racing for one powerful position.

Who is Running for U.S. Presidential Election 2020

Most of the candidates entered the race for the 2020 United States Presidential Elections as far back as over a year ago. By the end of 2019, thirty-two (32) candidates have been announced. Currently, only four candidates are still in the race as all the other candidates dropped out before or after the primaries. This obviously means that twenty-eight (28) candidates have dropped out of the election. This reminds me of the say, ‘If you cannot take the heat, get out of the kitchen’.

The four candidates still running in the 2020 United States Presidential Elections are listed below;

The first three names listed above are Democrats and the last one is a Republican. We are not certain if all these candidates would make it to the end of the primaries which is still going on in some states.

The U.S. 2020 Elections Dropped Out Candidates

This current list has a total of twenty-five (25) Democrats and three (3) Republicans. As the day for the general elections and the end of the primaries draws near, the battle gets tough.

The date scheduled for the 2020 United States Presidential Election is on Tuesday, 3rd of November, 2020. This is the day America will have its general election. On this day, citizens would select electors to represent their states and in turn vote for the candidate they want. . However, the general election is an indirect election because voters select a person to vote in their choice.

After the general elections, the Electors which forms a body named the Electoral College is responsible for electing a president directly by casting their votes on the candidate of the choice of those who selected them. The election would take place in all the state in the nation as the electors gather together in their various states to cast their votes

This casting of votes has been scheduled for the 14th of December, 2020. The results of the votes are then announced that same evening and the winner of the 2020 United States Presidential Election is known.

How a Candidate is Declared the Winner of the 2020 Elections

After the electoral election and the winner is announced, an inaugural ceremony follows. This does not happen immediately though, as the new president is given time to select his or her cabinet members and make plans.