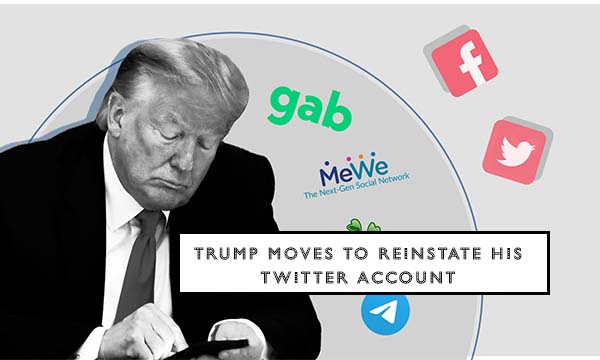 According to the Washington Post, in a filing late Friday, Trump asked a federal district judge for a preliminary injunction enabling his return to Twitter while his lawsuit against the social media giant continues.

The filing also argued that Twitter had suspended Trump’s account after being “coerced” by his political rivals in Congress.

Twitter banned Trump from its platform on Jan. 8, stating that two of his tweets had violated the company’s policies and citing “the risk of further incitement of violence.”

The unprecedented move came after the riot on Jan. 6 in which hundreds of Trump’s supporters stormed the U.S. Capitol in an attack that resulted in five deaths and left about 140 police officers injured.

Trump’s account, which was known for unfiltered late-night tweets, often written in capital letters, had 88 million followers and was a key communication tool during the Trump presidency.

Though Trump remains free to speak to the media or make public remarks, his ability to attract attention and media coverage has diminished dramatically under the ban.

In July, Trump sued Twitter, Facebook, and Google, as well as their chief executives, alleging that they unlawfully silenced conservative viewpoints on their platforms and violated his First Amendment rights by suspending his accounts.

Legal experts and business associations predicted the lawsuits had little chance of succeeding in court, given that the First Amendment to the Constitution protects against censorship by the government, not by private companies.

Nonetheless, Twitter’s ban of Trump, an action repeated by other social media companies including Facebook, Instagram, YouTube, Snapchat, and Twitch, also has drawn critical attention to the power wielded by a handful of tech companies and to their ability to shape the national debate.

Even as he announced the ban earlier this year, Twitter chief executive Jack Dorsey expressed unease about depriving Trump of his online platform.

“Having to take these actions to fragment the public conversation. And sets a precedent I feel is dangerous: the power an individual or corporation has over a part of the global public conversation,” Dorsey said in one tweet. However, he also defended the ban as “the right decision for Twitter.”

“We faced an extraordinary and untenable circumstance, forcing us to focus all of our actions on public safety,” he wrote. “Offline harm as a result of online speech is demonstrably real, and what drives our policy and enforcement above all.”

Twitter has been testing a host of features that it says will boost user safety on the platform, including a “safety mode” tool, which when enabled would automatically detect and temporarily block accounts deemed insulting to users.

Earlier this year Trump told Fox News: “Twitter now is very boring.” You can get more details from this link.

Tons of Twitter Accounts Up For Sale on The Dark Web

Twitter Has Sued Elon Musk to Complete Its $44B Buy