Toyota wants to make you pay to start your car with your key fob. Toyota is charging drivers for the convenience of using their key fobs to remotely start their cars. 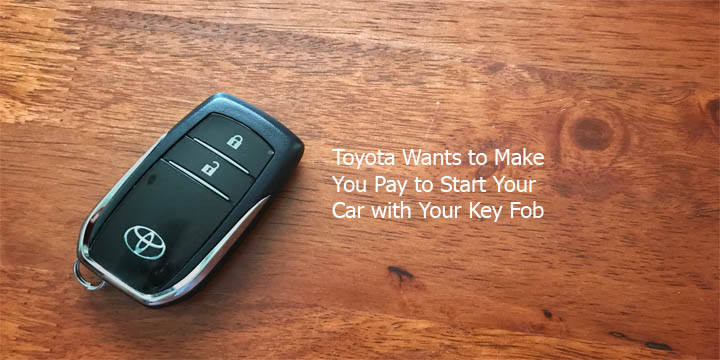 According to a report from The Drive, Toyota models 2018 or newer will need a subscription in order for the key fob to support remote start functionality.

As The Drive notes, buyers are given the option to choose from an array of Connected Services when purchasing a new Toyota, and one of those services called Remote Connect just so happens to include the ability to remotely start your car with your key fob.

The verge noted buyers are offered a free trial of Remote Connect, but the length of that trial depends on the audio package that’s included with the vehicle.

Even more confusingly, only some Toyota models support the Audio Plus or Premium Audio packages that the free trial is offered with, which you can check out for yourself in this PDF.

In other words, the key fob’s remote start functionality is tied to the audio package that comes with the car. This was first spotted in a post on Reddit, where the original poster added a link to Toyota’s Remote Connect marketing materials (PDF).

The post has since been flagged as “potentially misleading,” however; Toyota confirmed to The Drive that users will, in fact, have to pay for remote start when the free trial ends.

The pamphlet linked to in the post details the key fob’s remote start feature, as well as its relation to the Audio Plus and Premium Audio packages.

After that, drivers will have to pay the monthly or yearly price for the full Remote Connect service, which includes the remote start feature for the key fob.

On Toyota’s Remote Connect page, it’s not entirely clear that the key fob’s remote start functionality is included within the plan.

It says that the Remote Connect service lets drivers use their smartwatch, smart home devices, or smartphone to start their cars, but there isn’t any mention of using the key fob for remote starts.

And as The Drive points out, it looks like some users have been aware of this for years. In a thread dated back to 2019 on the Toyota Nation forum, users discuss the key fob’s remote start functionality.

Some users claim that their key fob is still able to start their car remotely, however, most of the users on this thread own a Toyota that’s 2018 or newer, which means they may still be covered by the free trial.

Typically, paywalled features like these are limited to luxury car brands. In 2018, BMW made drivers pay an annual subscription for Apple Car Play in addition to the $300 it charges to install the feature in the first place. The German car manufacturer later walked back on its decision nearly two years later.

However, BMW still does let you pay to “unlock” new features in your car, in a way that’s been described as in-car microtransactions.

The all-electric Porsche Taycan has a similar system, dubbed Functions On-Demand, which lets drivers purchase new, optional features for their Porsche, like Active Lane Keeping or Dynamic Light System Plus.

Meanwhile, Cadillac charges users monthly after the end of the free trial for its hands-free driving mode, Super Cruise, which has since been temporarily discontinued in newer Escalades due to the chip shortage.