Bombshell the movie is about the provocative real story of three whip-smart, ambitious, strong women who anchored one of the most powerful news networks in America and becoming headlines themselves when they risked everything to stand up to the man who made them famous. 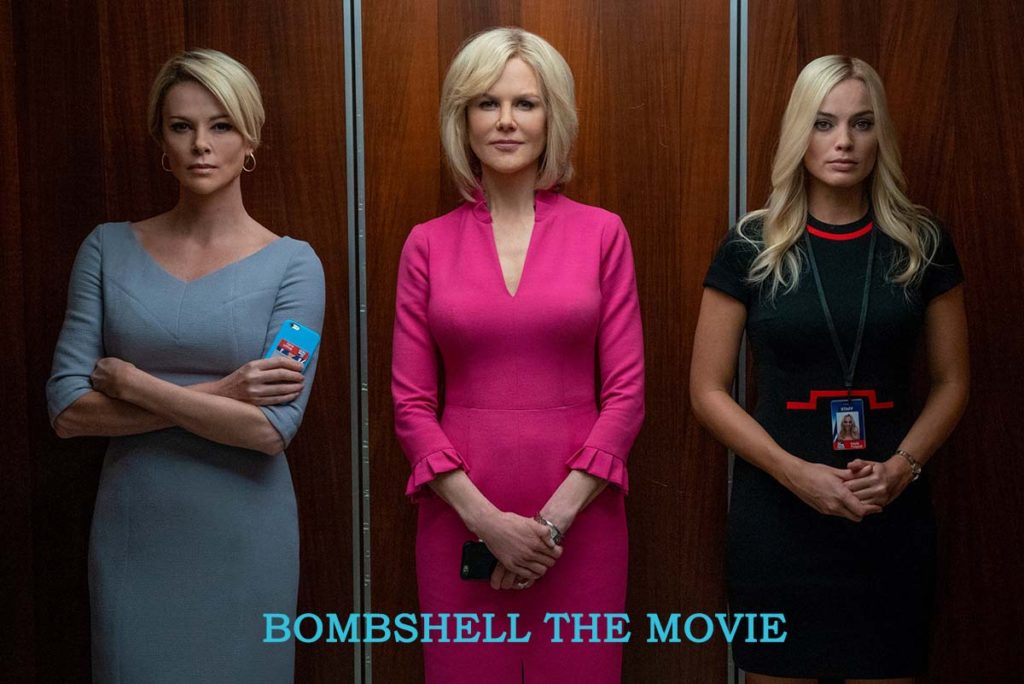 The bombshell” depicts, with equal parts bemusement and outrage, the explosion that occurred when the women of Fox News Channel dared to expose the culture of sexual harassment that had prevailed for so long at the cable television juggernaut.

More than a year before allegations of abuse and harassment against Harvey Weinstein would spark the #MeToo movement and crater his career; there was Roger Ailes, the fearsome TV news titan whose personal empire came crumbling down.

In Bombshell the movie Director Jay Roach’s film follows those fraught days during the summer of 2016 when “Fox & Friends” morning show co-host Gretchen Carlson filed a lawsuit against the former Fox News CEO and Megyn Kelly the network’s biggest star at that point came forward with Ailes harassment tales of her own.

It’s all weighty, serious material with huge stakes—emotionally, culturally and financially. But Roach, working from a script by Charles Randolph, finds a tricky balance of portraying these events with a sprightly tone while crafting a steadily building tension. “Bombshell” is both light on its feet and a punch in the gut.

About the Movie Bombshell

“Bombshell” is a fictionalized account of the women who brought down Roger Ailes, the chairman, and chief executive of Fox News. Helped bring him down is probably more accurate given that he was ousted by Rupert Murdoch, who founded Fox News in 1996 before handing the reins to Ailes.

Since then, the network has become a ratings powerhouse and hothouse of right-wing talking points, a sea of white faces, and dolled-up women in skirts and high heels. Ailes is now gone but the talking points, high ratings, skirts, and heels remain. The movie’s title is clever, cleverness being its modus operandi.

The story, after all, is about female employees who, with icy smiles and iron ambition, worked for a conservative political force that institutionalized the harassment of women. The stars, with their unimpeachable talent, filmographies, and feminist cred, are a shrewd way of blunting skepticism.

Even so, the characters are tricky, especially Megyn and Gretchen, who come with ideological baggage that complicates Hollywood’s holy grail of relatability.

The stars, with their unimpeachable talent, filmographies, and feminist cred, are a shrewd way of blunting skepticism. Even so, the characters are tricky, especially Megyn and Gretchen, who come with ideological baggage that complicates Hollywood’s holy grail of relatability.

The Movie Bombshell wants needs us to like them, which may be why it breaks the fourth wall early on with Megyn directly addressing the audience, looking into the camera as she tours the network offices in a slightly tight red, white and blue dress. One man yells out a compliment, another looks her up and down. She keeps on walking, focused, hips swinging like knives. To get more details and know the names of each cast kindly click here.