Sony’s Free PS Plus February 2022 Games. The three games that would be free on PlayStation Plus this February have been announced. The lineup is expected to include Notable titles like EA Sports UFC 4 and Tiny Tina’s Assault on Dragon Keep, both the PS4 and as well a third game exclusively available to all owners of the PlayStation 5 which is Planet Coaster: Console Edition. 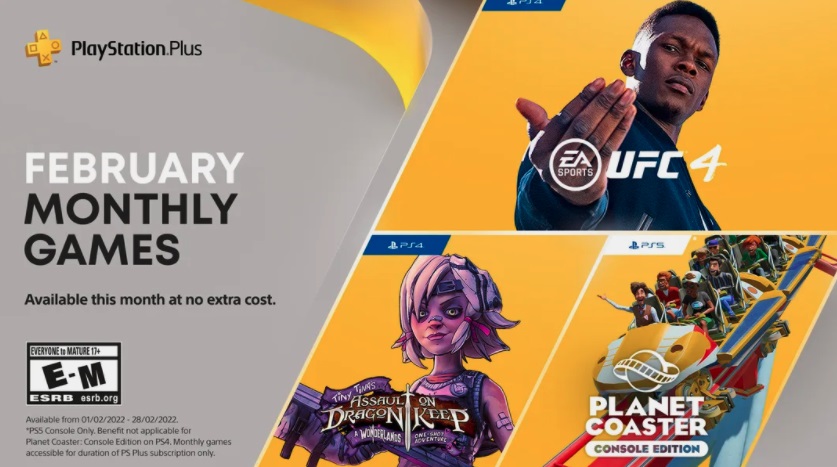 Just as expected, the next PS Plus is expected to arrive starting from February 1, 2022, and would remain available for subscribers up until the download on February 28.

This game is the best game to arrive in Sony’s PS Plus February 2022 lineup. This PS4 title was released in 2013 as a DLC campaign for Borderlands 2, later scoring a re-release as a standalone “A wonderlands One-Shot adventure” on the 9th of November, 2021.

The DLC standalone version doesn’t need you to purchase a borderland 2, plus it is accommodated with some new additions, including items like the Loot-a-Pult. The game is expected to be available on PC, Xbox, and PlayStation, including the current-generation consoles via backward compatibility.

The game is expected to arrive as a free option for PlayStation Plus Subscribers is no doubt intended to boost your excitement for Tiny Tina’s Wonderlands, a full First-person action game from Gearbox and 2K.

The title, which is a proper spinoff from the Borderlands series, is considered a successor to Tiny Tina’s Assault on Dragon Keep. If you’re a PS Plus subscriber, Sony’s free game offers a great way for you to familiarize yourself with the fictional world ahead of wonderlands release on March 25, 2022.

EA Sports UFC 4 is a mixed martial arts (MMA) game released on the 14 of August 2020. The title is expected to allow MMA fans to step right into the octagon and compete with their favorite fighters. The PS$ game builds upon EA Sports UFC 3, although reviews for it are a bit lackluster compared to the much older title.

The game is expected to bring notable elements for MMA fans, including a progression system that takes players from amateur to major fighters, plus the title is added online World championships and Blitz Battles. Though it is a great option for all PlayStation owners that want to enjoy sports games, it’s far from the exciting title that we have seen a drop as a part of the PS Plus free games lineup.

Just as mentioned, the PS Plus February 2022 lineup is expected to have a title specifically for PlayStation 5 console owners. The original version of the game was released on November 17, 2016, for Windows PCs. The game is expected to include four difficulty settings, a career mode, and a sandbox mode for players that are interested in unleashing their creativity.

The PlayStation 5 owners get to download the title for free starting on February 1 and make use of it to create their own rollercoaster theme parks. The game includes difficulty settings, a career mode, and a sandbox mode for players only interested in unleashing their creativity.

The “Console Edition” version of Planet Coaster adds about one new blueprint, which is essentially pre-built structures and other items for quickly creating parks. Players also get to access construction for when they’re feeling a bit more creative, plus this version of the game adds the Frontier Workshop Platform for locating and sharing parks.