Sen Warren and AOC Demand Amazon Answer after Warehouse Deaths. No doubt the tragedy at the amazon warehouse has affected a lot of families. This has prompted the Senate to demand amazon be answerable. 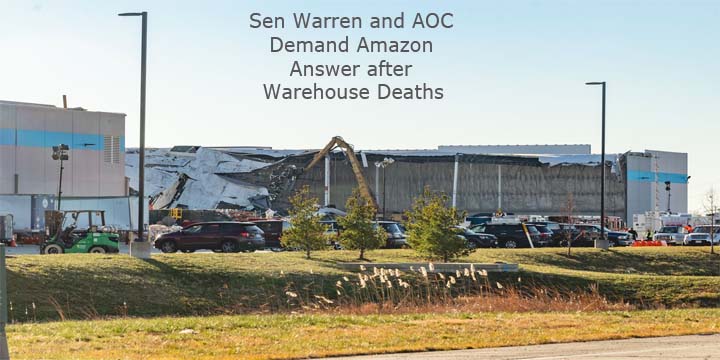 According to the verge, a group of progressive Democratic lawmakers, led by Sen. Elizabeth Warren (D-MA) and Reps. Cori Bush and Alexandria Ocasio-Cortez, is demanding answers from Amazon after six people were killed in a tornado strike at one of its warehouses in Illinois.

“As we work to ensure that tragedies such as this one are not repeated, we seek answers about what happened at your Edwardsville warehouse,” the letter continues, “and whether your policies may have contributed to this tragedy.”

The tornado was part of a complex of extreme weather centered in western Kentucky on December 10th, leaving at least 58 dead over more than 150 miles. The path of destruction included Amazon’s fulfillment center in Edwardsville, which was entirely destroyed by the strike.

In the aftermath of the building collapse, reports emerged that workers at the warehouse didn’t receive proper safety training, and an overall lack of preparedness by Amazon left workers in harm’s way, despite weather warnings that tornadoes were likely that day.

Warren said in an email to The Verge that the circumstances in Edwardsville served as “another reminder that Amazon’s anti-worker and anti-union practices put their workers directly in harm’s way. Putting corporate profits above the health and safety of workers is unacceptable.”

The Letter is also Signed by Democratic Sens

The letter includes a list of questions for Amazon to answer by January 3rd. In particular, the lawmakers ask who was working at the Edwardsville warehouse on December 10th and what safety policies Amazon had in place.

They also want to know whether Amazon required workers at the plant to remain at work despite the tornado warning.

Last week, Bloomberg reported that a nearby driver was instructed to continue deliveries just 90 minutes before the tornado strike, being told by their dispatcher that the storm sirens were “just a warning.”

Amazon is investigating the incident and has said that the dispatcher “should have immediately directed the driver to seek shelter.”

The lawmakers also write they are “deeply concerned” about reports that Amazon plans to reinstate its mobile phone ban, which it paused in 2020 because of COVID.

However, Amazon spokesperson Alisa Carroll told The Verge last week that the company had updated its cell phone policy. “All reporting that it’s been rolled back to pre-COVID is simply not true and factually incorrect,” Carroll said.

Two of the people killed in the Edwardsville warehouse collapse were constituents of Rep. Bush, who represents a district in St. Louis.

She said in a statement that “Amazon’s profits should never come at the cost of our community’s lives, health, and safety. This cannot become the cost of doing business in America.”

Best Face Serums – How Often Should I Use Face Serum?