Roku might lose YouTube this week, now is a good time to download the app. An intensifying feud that has pitted YouTube, one of the most popular known streaming apps in the world, against Roku, also a leader in TV streaming devices, could be about to boil over. 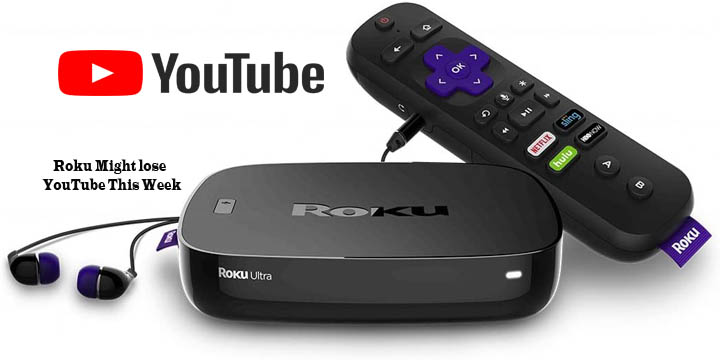 The verge stated in an article that both companies have said that unless they can reach a new distribution agreement in the coming days, the YouTube app will be removed from Roku’s channel store for new users on December 9th.

The major development would follow months of stalled negotiations, and there have already been consequences for consumers caught in the middle: the YouTube TV app was pulled from Roku’s channel store earlier this year, though it can still be accessed by customers who already downloaded it.

Now the much more popular YouTube app, a portal to the world’s largest video sharing platform, faces the same cutoff and store removal.

With the deadline for a new YouTube deal looming, Google and Roku have continued publicly bickering and expressing frustration with each other over the last several months.

Roku has accused Google of anticompetitive behavior and says the company’s terms and requests go beyond the asks of other major streaming services, while Google has maintained Roku’s claims are baseless and criticized the company for trying to negotiate new deals for YouTube TV and YouTube simultaneously instead of handling them separately.

Google also added a YouTube TV backdoor directly to the regular YouTube app to preserve live TV access for subscribers of the $65-per-month service; Roku responded by calling this the behavior of an “unchecked monopolist.”

Losing YouTube Would Be a Significant Blow for Roku’s Platform

Losing YouTube would be a significant blow for Roku’s platform, though it’s one that others have faced. Amazon’s Fire TV devices went without an official YouTube app for more than a year before the two sides came to a deal in that case and the app returned.

Apple has managed to keep YouTube on its Apple TV set-top boxes from the start, though its own differences with Google have sometimes delayed features like 4K playback.

Still, one of the core appeals of Roku is its simplicity and vast app selection. Having a hole the size of YouTube in its app catalog would throw a wrench into that reputation.

This type of situation always comes down to the wire just as it recently did when YouTube TV and NBCUniversal managed to settle tense carriage talks without any channels being lost. So stay tuned, and it’d be a good idea to download YouTube to your Roku devices now just in case things go sideways.

YouTube provides a simple way for people to store videos online and share them with others. YouTube videos cover any topic anyone cares to upload a video about. These videos are easy to share via other forms of social media, email, and websites and can also be embedded in other websites

YouTube is the 2nd largest search engine next to Google. People upload more than 100 hours of video per minute to YouTube. It’s one of the best ways to communicate to a wide audience, whether you’re promoting programs or providing information to students.

Roku is a brand of digital media streaming devices produced by the company Roku Inc. Roku devices connect to your TV or exist as software within a smart TV, and enable you to watch TV shows, news, movies, and other content over the internet through downloadable channels.

Functioning similar to the Amazon Fire TV and Apple TV 4K, Roku devices are small streaming boxes or streaming sticks that connect to your television.

They put streaming content from Netflix, Spotify, Hulu, Disney+, and more (subscriptions required) in one easy-to-search place on a TV screen.