Oppo teases about the retractable rear camera for phones. Oppo has released a brief video cueing at a new type of camera design for smartphones. 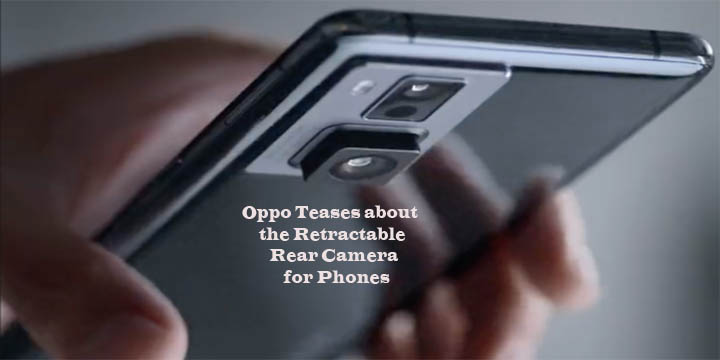 The company’s “self-developed retractable camera” is shown extending from the phone’s body before retracting back inside.

The verge notes that the video suggests that the mechanism is waterproof and that it’ll automatically retract the camera if the phone is dropped.

Oppo Teases about the Retractable Rear Camera for Phones

Unlike pop-up selfie cameras that hide inside a phone until needed, moving the camera back and forth on the Z-axis could have implications for image quality, though Oppo hasn’t yet claimed anything about any optical advantages of this design.

It doesn’t appear to be a zoom lens, given it’s marked simply as 50mm, but it could theoretically help improve telephoto performance.

Most pop-ups are annoying…

But not our self-developed retractable camera!

Oppo Inno Day is Around the Corner

The markings on the camera module show that the sensor is 1/1.56 inches and the lens is 50mm-equivalent with an f/2.4 aperture, meaning it should be around 2x longer than the phone’s main lens.

That’s a much bigger sensor than you tend to find behind telephoto lenses, so maybe the extra height allowed by the retracting mechanism is what makes this possible.

Oppo is releasing this video ahead of next week’s annual Inno Day event, where the company often shows off various concepts and technologies before they’re commercially deployed.

OPPO Electronics Corp. is an electronics manufacturer based in Guangdong, China. Known for its smartphones, the company also makes MP3 players, portable media players, LCD-TVs, and DVD/Blu-ray players. It was founded in 2004. The company is also a smartphone maker.

The Oppo Find X2 Pro is one of the best phones you can buy from Oppo right now, with a top-end display, processor, camera array, and software.

If you can look past the high price, however, the Oppo Find X2 Pro is definitely worth your attention, and we’d recommend it as the second-best Oppo phone you can buy right now.

The Oppo Reno 10x Zoom, named after its 10x hybrid zoom, is one of the best smartphones you can buy right now. It has got a sleek design, with rear cameras that are flush with the back of the phone, and a distinct ‘shark-fin’ pop-up camera section that houses the selfie camera, as well as the rear flash.