The new Twitter’s CEO wants the company to move faster. The new CEO of Twitter, Parag Agrawal, has stated a clear message: expect the social network to move a lot faster than it has in the past. 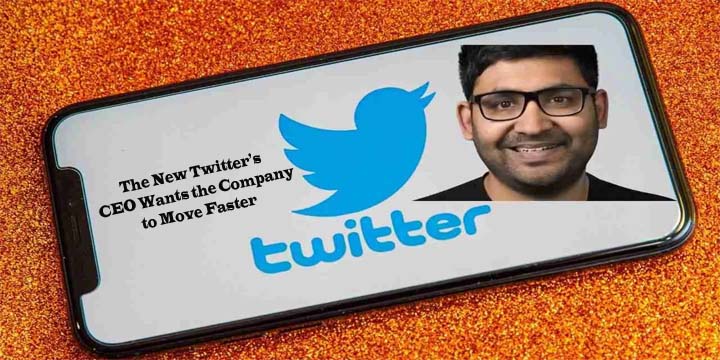 In his first public appearance he made after he took the reins of Twitter from co-founder Jack Dorsey, Agrawal says his top priority is “improving our execution” and streamlining how Twitter operates.

According to the verge, his comments, made at the Barclays technology conference, come after activist investor Elliott Management shook up Twitter’s board of directors last year and pressured Dorsey to step down from his part-time CEO role. Dorsey remains the CEO of Block (formally called Square).

The New Twitter’s CEO Wants the Company to Move Faster

Despite being Twitter’s CEO for only nine days, Agrawal has already made big changes to its upper ranks. He reorganized the company last Friday under the key pillars of Consumer, Revenue, and Core Tech, with a general manager running each division. “

I believe we have set them up so they can really move fast,” he now says. As part of the change, two executives who previously reported to Dorsey engineering lead Michael Montano and Dantley Davis, the head of design and research plan to leave at the end of December.

“We were operating previously in a functional structure where we had a single engineering organization, a single design research organization, and product teams that were matrixed into them,” Agrawal says, implying that the setup slowed the company down.

Along with the three new general managers who are Kayvon Beykpour, Bruce Falck, and Nick Caldwell Lindsey Iannucci was named VP of Operations.

“She’s going to help us improve our operational rigor in this new structure to really get us to faster decision making, clearer ownership, increased accountability, improved operations, which will result in faster execution overall and better results,” according to Agrawal.

His Focus Was Mainly On Speed

His focus on speed was a reoccurring theme throughout the roughly 30-minute interview. He explained how, in his previous role as a chief technology officer, he focused on rebuilding the company’s aged technical stack so that products could be shipped faster.

He admitted there has been “slow decision making because of so much coordination that needed to happen” between teams to get changes out the door.

His comments amounted to a direct acknowledgment that Twitter hasn’t met expectations from investors since it went public and that the company has been slow to address shifts in user behavior over the years.

The Opportunity around DMS Is Really Key

When asked about Twitter’s just-announced acquisition of the messaging app Quill, Agrawal called direct messages “a key product bet” a refreshing sentiment given that DMs have been woefully underdeveloped for a long time.

“The opportunity around DMs is really key,” he said, adding that “it’s a way you can connect with anyone in the world and expect to hear back from them.”