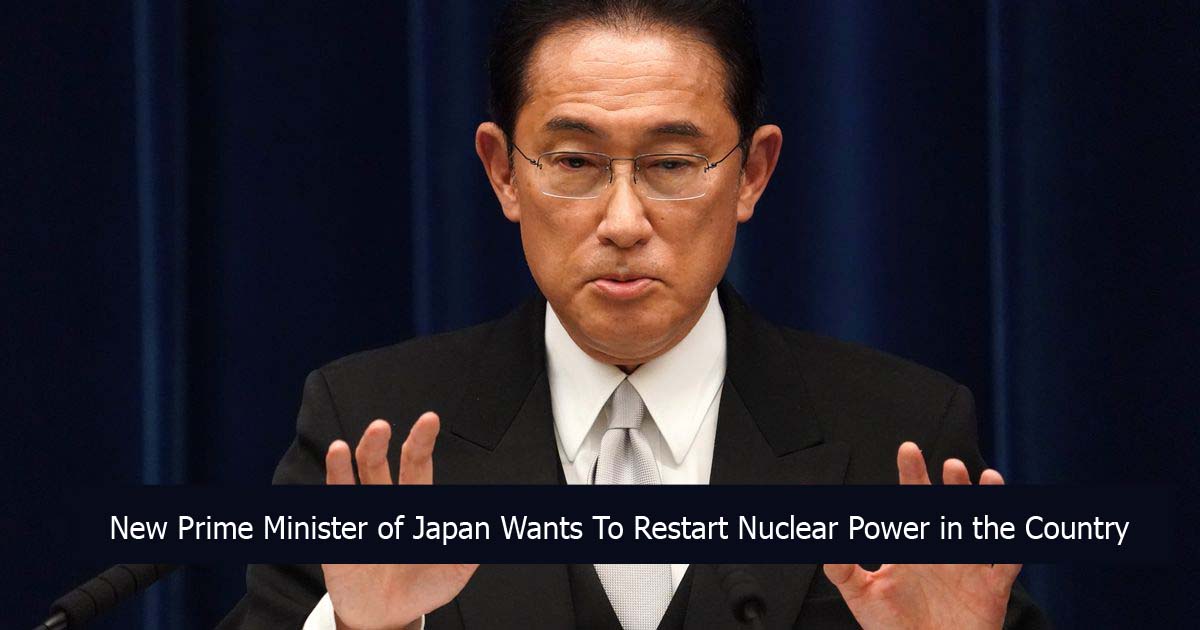 After Japan’s nuclear disaster in 2011 that struck Fukushima, the country quickly scrapped its nuclear plant. And after two years a tsunami led to nuclear meltdowns at the Fukushima Daiichi power plant, Japan has quickly moved to shut down its entire fleet of nuclear power generators.

In a report by Reuters, Fumio Kishida on Monday made known to parliament his intentions to change that. He said, “It’s crucial that we restart nuclear power plants.” This was his first time facing questions in parliament since he became prime minister last Monday. In a last-minute change of events, Kishida became the leader of the ruling liberal democratic party in late September. This change is coming ahead of the general elections in Japan on October 31st. he is however expected to retain his post as the libral Democratic Party has been in power for the past 61 years.

Prime Minister Kishida noted that renewable energy sources like wind and solar will eventually not be enough to power the whole of Japan in coming years in a speech to parliament. And looking at the whole thing from a different perspective, he just might be right. The government currently is pushing the public and private sectors to digitize more as japans face to face work is currently struggling to adapt to the post-pandemic era.

According to Nikkei, Kishida on Friday said to parliament that “it goes without saying that renewable energy is important, but our country is in the midst of a digitization drive, which means that electricity demand is going to increase sharply. When you think about this, you realize that supply stability and affordability are just as important as the number of emissions. That means that we need to have a variety of energy sources, including nuclear and hydrogen as well as renewables.”

When it comes to the topic of nuclear power, it is a controversial one, not just in Japan but all over the globe. It is no denying that nuclear power is more reliable than wind and solar electricity has given that it emits little carbon. But given the incidents of Chernobyl and Fukushima, the dangers that present themselves with it cannot be overlooked.

And for the reason that it is more reliable than any other source of energy, environmentalists and scientists have pushed governments to adopt more nuclear power. This could however replace coal and gas power complimenting the increased demand for renewable energy.

After taking its time to settle on its carbon-emission goals, japan just last year committed to net-zero greenhouse emissions by 2050. The country also committed to stopping funding overseas coal plants in May. Kishida is also expected to attend the 2021 United Nations climate change conference or the COP26.