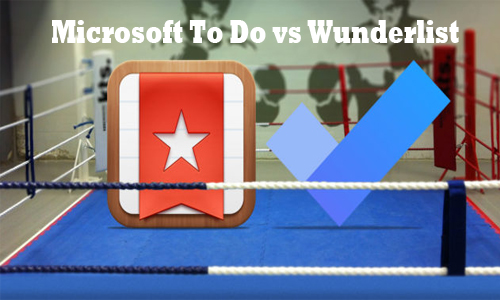 Microsoft To Do vs Wunderlist

If you wish t get more things done, you would need some kind of list (to-do list). Thanks to smartphone apps like Microsoft to do and Wunderlist, it is now easy to carry it around. Using the App Store to search for apps, you would be placed with lots and making a choice would be hard. But in this article, I will be discussing the two best to use. Most individuals say Wunderlist is the best while others say Microsoft is the best. So let’s dive into my review. But let’s know the meaning of each term.

Microsoft to do is a simple cloud-based task management application compatible with any device. The app allows its users to manage all their tasks from a smartphone, computer or tablet. It is developed by the team behind Wwunderlist.

Wunderlist as most people must have known is a discontinued cloud-based task management application. The application allows users to manage tasks from their smartphones, tablet, computer, and also smartwatch. Though it is free but additional collaboration features require the paid version.

Now we know what they both mean, let’s have a look at the review of both.

Though this article might be based on a comparison between the two. We are doing so to know if Microsoft to do has all the features in Wunderlist. With that, you can decide to switch or continuing using the one you’re.

Microsoft To Do and  Wunderlist both have their bad and good sides which we’ll be discussing below. Here are the pros and cons;

Microsoft To Do Pros

Actually, the user interface in an app has an important role to play. Microsoft To-Do vs Wunderlist both have a similar interface. Well, there’s no wrong as both are coming from the same developers. Microsoft To Do has a light and dark mode, which is great as you don’t have to choose the appearance of the app.

Wunderlist on the other hand, offers different color accents, with users can customize it. On both apps, users have control of how they want their lists to appear and different colors can be added to different lists. This process can be done from users or individual settings of lists.

One great feature is that you can not only change the colors but also add wallpapers of your choice. Wallpapers can be selected to customize their user interface. Microsoft and Wunderlist both have their default wallpaper. On Wunderlist, you can create new ists for categorizing your tasks and the same goes for Microsoft. In the user interface aspect, they both seem to have similar features.

Though the two apps have a similar user interface, actually there’s a difference. But in the productivity features, they both pretty much have the same. As the features of Wunderlisted has been incorporated in the Microsoft To Do ist. Users can create separate lists to help keep their lists organized. There’s a new feature “My Day” which is presented in the Microsoft To Do app. But not yet Wunderlist.

How can I make a Switch from Wunderlist to Microsoft To Do?

The app’s developers actually want its users to switch from Wwunderlist to Microsoft To do. By that, making the whole switch process easy and straightforward. Here’s how;

Just like that, everything would be imported and you can start using it.