Instagram is taking a new step as Instagram Drops Recent Posts from Hashtag Pages Ahead of the Election. This step is to terminate the wide spreading of wrong information been shared about the United States Presidential Election 2020. The popular social media app will be temporarily disabling “recent” posts from appearing on hashtag pages in order to hinder the real-time widespread of potentially harmful content and information that could be displayed around the election,” the company said. 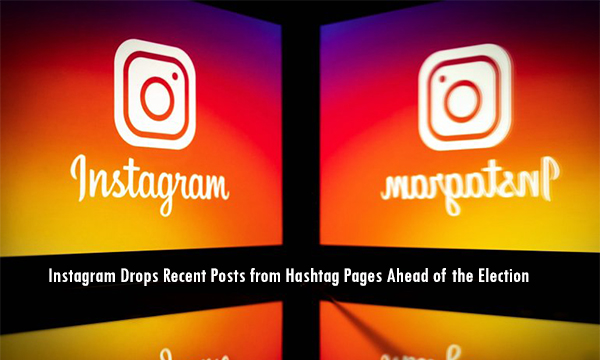 Instagram Drops Recent Posts from Hashtag Pages Ahead of the Election

According to a post by Instagram Comms, Instagram is taking a new step to prevent the spread of misinformation ahead of the presidential election. The app is temporarily stopping “recent” posts from appearing on hashtag pages in order to reduce the real-time spread of potentially harmful content that could pop up around the election,” the company said.

Instagram has been Slower to Deal with Misinformation in the Past

Historically, Instagram has been slower to deal with conspiracy theories and misinformation than Facebook. During the year 2016, the social media photo-sharing app was “the most effective service used by the IRA to operate on its information operations campaign,” as said according to an ensuing report on Russia’s election interference from the Senate Intelligence Committee. And the app’s fact-checking established policies only fully caught up to Facebook’s own policy this year.

This new change was made known after Facebook takes a more aggressive process to prepare for an uncertain election, which company officials have said could yield in violence or citizens uncomfortable moments. The social media company also adjusted its policies to provide restrictions on political ads in the week before the election day and will bar all political ads after the polls is closed. The company has made preparations for how it would handle candidates trying to prematurely claim victory or refusing to concede during this presidential election.

During the company’s third-quarter earnings call on the 29th of October 2020, Thursday, the CEO of Facebook; Mark Zuckerberg made a speech on how he was worried about situations and what might happen after the election day. He added; “I’m worried that with our nation been divided and the election results potentially taking more days and weeks to be finalized, there is a risk of civil unrest across the United State”.