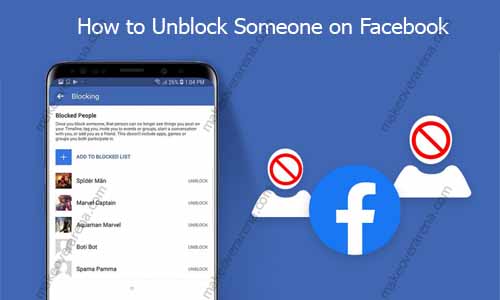 Unfriending them is not the best option to prevent them from seeing you. They can still search and see your profile even after you have unfriended them. You can Restrict a user to prevent them from seeing the post you share only to friends. Also, you might still want to unblock some of your Facebook friends or other users you have blocked. You will be open to more information as you read on.

Before you can unblock a user from Facebook (How to Unblock Someone on Facebook), you would have blocked them before. This might be done as a mistake but nevertheless, you can assess your blocklists to see users you have blocked from your Facebook.

Other than users, there are other things you can block on Facebook. They include:

To see and manage what you have blocked on Facebook you will have to access the Blocking menu.

If you are tired of seeing another Facebook user’s posts, or you want to prevent them from seeing your profile or posts then you will follow the steps:

On your computer or mobile web browser:

If you have blocked a Facebook user or a friend, they will not be able to:

This is another option that will appear when you want to confirm the blocking of a user. You can also take a break instead of blocking a user. When you take a break from being a Facebook user you will be able to:

You can also block a user from sending you messages instead of blocking the user. You can do this by:

And confirm by clicking or tapping on Block from the confirmation page.

You can unblock them by clicking or tapping on “unblock” at the end of their name on the list.

Blocking one of their profile only blocks that profile. It doesn’t block their other profile. This simply means that you may still be interested in other profiles. For instance, You may start a conversation with those profiles or add them as a friend.

To get that done, you will have to tap on the top right of your Facebook page. Then scroll down and click on settings. When that is done, scroll down to audience and visibility and tap blocking. When Unblocking, click on the unblock button that will take you to the next profile you want to unblock.

Click on the “setting and privacy button, then tap on settings. Then locate the blocking option. Then tap on “Unlock” next to the name of the person or page you want to unblock.

The length of a temporary block by Facebook depended on the severity of the violation and the user’s history on Facebook. It has been observed that a temporary block may last as little as a few hours. However, it could also last up to 30 days.