Horizon Forbidden West Has Some Massive Machines Surprises. Anyone that happens to have Played Horizon Zero Dawn should already be aware of the fact that machines are the major highlight of the game. Well, this should not shock you, but the machines are back and much bigger in the Horizon Forbidden west, and this article would be giving you a great look at them. 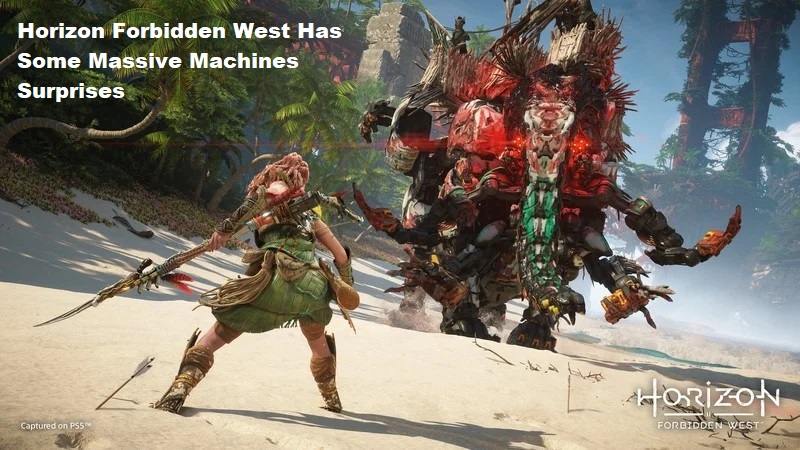 The last trailer released for Horizon Forbidden west arrived, and it’s all about the machines Aloy will face while embarking on her journey to the forbidden west.

The new trailer released with the title “Machines of the Forbidden West,” is actually quite beautiful, in a sense. Though the machines were shown to be certainly intimidating creatures, the trailers also show them carrying out their own thing in a very beautiful environment.

The trailer also stated that Aloy and her enemies would get to manipulate the machines for their very own use. And that’s is likely going to set up some sort of conflict for the game.

These three machines were shown in the trailer, with McCaw stating that some of them will “serve as the guardians of the natural order, While others were created just for the purpose of killing.

The Horizon Forbidden West currently is among the most anticipated upcoming games coming from the PlayStation 5. Even though we’re more than a year out from the console’s launch, the Horizon Forbidden West would not come as a PS5 exclusive. This game also would be launching on the PlayStation 4 when it arrives next year, meaning those that are yet to upgrade would not have to sit out this one.

The game was expected to launch late in 2021, But Guerilla and Sony eventually decided that they would delay the launch until 2022. They recently confirmed the release date to be February 18th. When the new release date was confirmed, Guerilla revealed that the studio, like many others, had encountered issues when it comes to keeping the project on track amid the COVID-19 pandemic.

The big picture here now is if the Horizon Forbidden West would make its way to PC. The first series of the game “Horizon Zero Dawn” came to PC in August 2020, more than three years after it originally launched on PlayStation 4. While it looks as if Sony will eventually port Horizon Forbidden West over to PC, PC users should expect a long period of wait for the PlayStation Exclusive game.