Google threatens to fire employees that are unvaccinated. Google employees who are yet to be been vaccinated could be put on forced leave and then let go from the company if they fail to follow its COVID-19 rules, according to an internal memo obtained by CNBC. 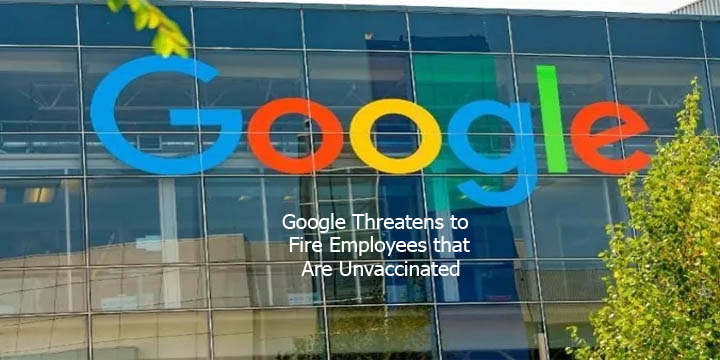 The policy will reportedly affect employees that would have fallen under the jurisdiction of President Biden’s vaccine mandate, which is currently facing challenges in the Senate and court system.

Google Threatens to Fire Employees That Are Unvaccinated

According to the memo, Google gave its employees until December 3rd to upload proof of vaccination or receive approval for a medical or religious exemption.

The company says that anyone who doesn’t do either of those things by January 13th will be placed on a 30-day paid administrative leave.

If they’re still not in compliance after the 30 days, they could face unpaid leave for up to six months and then be terminated, according to CNBC. Google isn’t denying the policy. Google spokesperson Lora Lee Erickson told The Verge:

As we’ve stated before, our vaccination requirements are one of the most important ways we can keep our workforce safe and keep our services running. We’re committed to doing everything possible to help our employees who can get vaccinated do so, and firmly stand behind our vaccination policy.

The CNBC report points out that there may be some options for unvaccinated employees — while the company expects the president’s mandate to apply to mostly everyone, employees can look for positions that aren’t covered by it, presumably ones outside of an office.

If they find one (or already have one) they’d also have to be able to do the job remotely. Google requires in-office employees to be vaccinated, reportedly saying that frequent testing isn’t an acceptable alternative. There is also the option to request an exemption.

Both Pay and Vaccination Requirements Have Been Hot-Button Issues

Though the company hasn’t determined when employees will have to come back to the office following the emergence of the omicron variant, it does expect that much of its workforce will be doing at least some work-in person.

However, CNBC says that even remote workers will need to be vaccinated if they fall under the mandate.

Both pay and vaccination requirements have been hot-button issues inside the company during a company all-hands, executives fielded a question about whether Google plans to raise wages to match inflation (the company said it didn’t plan to do so).

CNBC also reported last month that an anti-vaccine mandate manifesto, signed by hundreds of employees, was shared within Google.