YouTube TV warns its users they could lose Disney’s channels. Google has warned that YouTube TV could lose access to over a dozen Disney-owned channels later this week if they are unable to renew their agreement with the company. 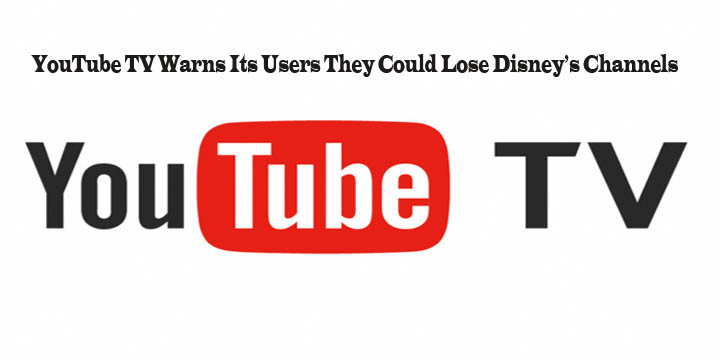 In a blog post, YouTube TV confirmed that its current deal with Disney is due to expire this Friday, December 17th, after which the channels could disappear if it’s unable to reach a new agreement.

YouTube TV Warns Its Users They Could Lose Disney’s Channels

This latest turn of events comes just a few days after Google settled a streaming dispute with Roku. Google recently threatened to pull YouTube and YouTube TV from Roku’s platforms before the two parties eventually agreed to a new deal last week.

The dust has just settled on this agreement, but it turns out that Google is now dealing with another streaming dispute.

“Our ask of Disney, as with all of our partners, is to treat YouTube TV like any other TV provider – by offering us the same rates that services of a similar size pay, across Disney’s channels for as long as we carry them,” YouTube’s blog post reads.

The Hollywood Reporter notes that eight ABC local stations could also disappear from YouTube TV. They are listed below;

The above is the list of the channels that are affected.

Disney said that it’s “Committed to Working with Google

The verge noted that in a statement given to Variety, Disney said that it’s “committed to working with Google to reach a fair, market-based agreement.”

“We are optimistic that we can reach a deal and continue to provide their YouTube TV customers with our live sporting events and news coverage plus kids, family and general entertainment programming,” Disney said. The tweet is below;

We always want to be transparent and give you a heads-up during these active conversations. Disney is an important partner, and we’re optimistic that we can work with Disney and keep their content available on YouTube TV. For live updates: https://t.co/R7MzaOv0p5

This Is A High Profile Carriage Dispute For YouTube

If a deal can’t be reached by December 17th, YouTube TV says it will decrease its prices by $15 per month while Disney’s channels are off its service.

It says that customers are free to pause or cancel their memberships at any time, and points them towards Disney’s $13.99 per month streaming bundle if they want to maintain access to “some” of Disney’s content.

This is just the latest high profile carriage dispute YouTube TV has been involved in this year. These have affected both the company’s deals to offer streaming content from other companies, as well as its agreements with hardware providers to host YouTube’s apps.

Less than three months ago the service was just days away from losing access to NBCUniversal’s channels before reaching an agreement in early October, and earlier this month it finally reached an agreement with Roku for it to continue carrying YouTube’s apps.