Francis Ngannou’s Punch Stats Suggest Tyson Fury Fight is a Bad idea for UFC Star. Francis Ngannou’s strike accuracy in the UFC suggests he would have a hard time landing on Tyson Fury in a potential crossover fight, which means that winning over Tyson will be a very difficult task. 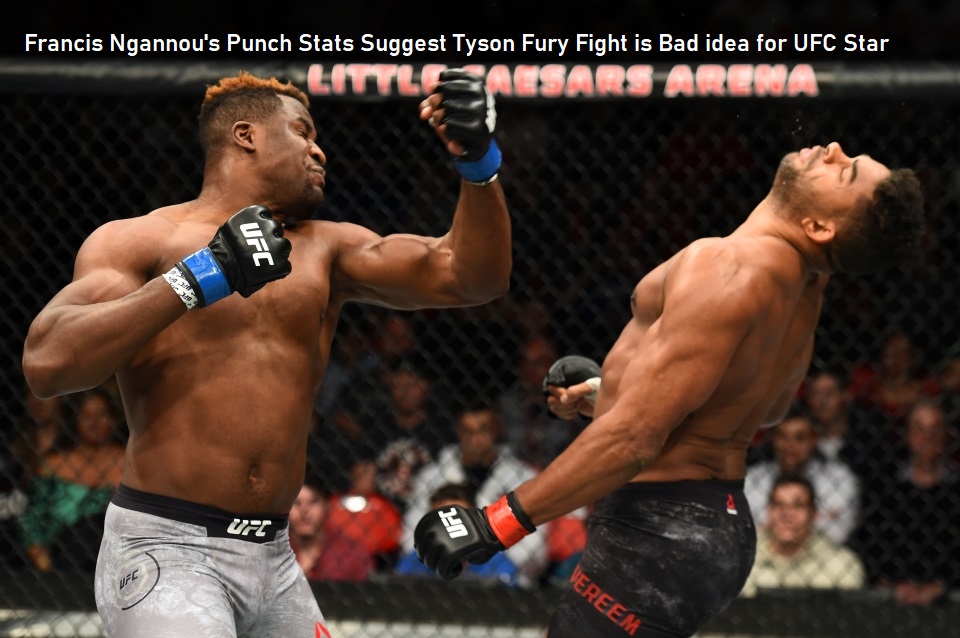 Ngannou – who defended his heavyweight title at UFC 270 recently against Ciryl Gane teased a fight with Fury after refusing to sign a new UFC contract.

‘The Predator as he is always addressed feels unprotected in certain terms of his current deal and wants his new contract to allow him box stars like Fury and Deontay Wilder.

An Instagram post by Harcord shows that Ngannou’s last UFC 270 opponent Gane had the highest significant strike accuracy of any heavyweight on the roster.

Ngannou does not lie in the top three as Alexander Volkov stays at second place, while former two-time champion Stipe Miocic is third.

Tai Tuivasa and Tanner Boser finish off the top five positions, with Ngannou having 41 per cent accuracy. Meaning Ngannou didn’t even feature in the highest 10 positions.

With all these, Ngannou’s lack of accuracy hasn’t really mattered much during his time in the UFC, having all but one of his wins coming by knockout.

Although, WBC heavyweight champion Tyson Fury has been very hard to hit during his undefeated professional career, the superstar heavyweight was dropped twice in his last fight against Deontay Wilder.

‘The Gypsy King’ has improved to 31-0-1 with his trilogy win against Wilder and has been called to face Dillian Whyte next, instead of Oleksandr Usyk in an undisputed fight instead.

Will Francis Ngannou and Tyson Fury ever meet in the ring?

“Me and Tyson Fury may fight in 2023. It will be challenging, but I will throw some bombs at him that he will not have experienced before,” he told Stake.

“I don’t know exactly when Tyson and I will fight. But I think maybe sometime in 2023. I am still under contract with UFC, so I don’t know right now the state of my situation or how it will play out.

“But I will say it will probably happen at some point. I definitely want to do it, but we don’t have control over it right now.

“I know it will be very tough when we fight. Not only am I coming from a distant sport, but I am testing myself against one of the best, if not the best, boxer ever.”