Elden Rings PC Specification has been Released Finally. “Elden Ring” would be arriving later this month, and if you happen to be planning on playing the game on PC, there’s no doubt that one topic has been on your mind, and it is the “hardware requirements.” Up until now, Bandai Namco and From Software hadn’t had any share of the minimum and recommended specifications for “Elden Rings,” leaving gamers to speculate. 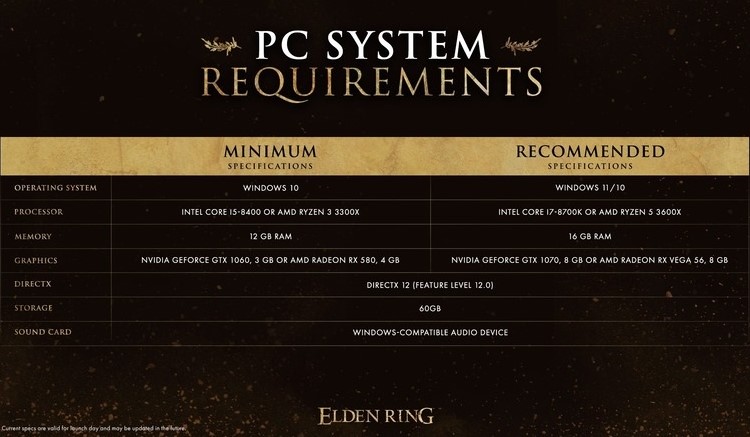 The details came just in time, as we are quickly closing in the release day and soon people will need to decide what platform they would be playing the title on.

If you want to play “Elden Ring” on your PC, today’s specification would tell us that you need a reasonable power rig if you must play the game. Nothing too extreme, but those that are in possesses ion of the GTX 900-series graphics cards from NVIDIA will find that their rigs do not meet even the minimum recommended specifications to run the game. The same seems true for those who are still rocking 8GB of RAM in their gaming rigs, as unfortunately, even the minimum requirements call for more than just that.

While some developers would like to head further than just the minimum and the recommended specifications nowadays, software and Bandai Namco are keeping it old school. Minimum and recommended hardware can be located in the image above, courtesy of the “Elden Ring” Twitter account.

The game required a minimum of Windows 10 for the operating system and either a Core i5-8400 or a Ryzen 3 3300X for the CPU. By now, those are fairly old processors, and much older-gen core 17 or Ryzen 5 processors will probably be suitable as well. On the graphics card front, you would be required to have an NVIDIA Geforce GTX 1060 4GB, and an AMD RX 580 4GB, or much better. Also, you would be required at least 12GB of RAM to run “Elden Ring,” which likely would be a much more common sight as time goes on.

Regardless of the level that you are trying to meet, your PC is expected to be running DirectX 12 and possess at least 60GB of free storage. You would also be required to have a windows-compatible audio device but that is not really a hard requirement to meet nowadays.