Just recently, an almost-millennia old sword was recovered from the Mediterranean Sea. The sword is seen to be encrusted with stones and shells after it had been resting in the sea for 900 years, 100 years short of a millennium. 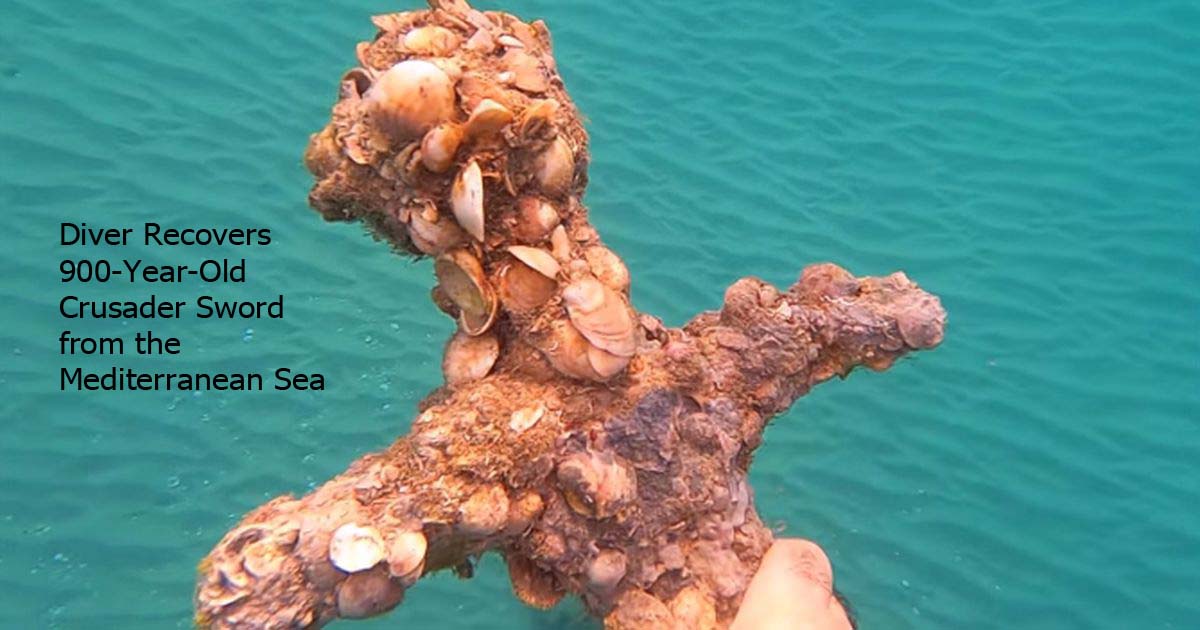 Shlomi katzin was the scuba diver who was scuba ding in a cove off the coast of Haifa, Israel when he saw an object at the seabed. And of course, he was curious. He immediately pulled the shell-encrusted relic that caught his eye at the seabed and from the sand. He held it before his GoPro camera and at the time de didn’t know what it was. Little did he know that he was holding an ancient sword, one that dates back to the time of the crusades.

What the Israel Antiquities Authority Had To Say About the Find

The find was immediately reported by Shlomi Katzin to the Israel antiquities authority. They examined it and found out that it was around 900 years old. In a Facebook post on Monday, Nir Distelfeld, the inspector for the IAA’s robbery prevention unit, said, “The iron sword has been preserved in perfect condition and is a beautiful and rare find…it evidently belonged to a crusader knight.”

The Measurement of the Sword

The sword was measured at 4 feet long and weighs over four pounds and this is of course measured with all the marine organisms that have called the blade home for the past 900 years. The sword is believed to be unearthed during a recent storm that shifted the sand that hid it for the past centuries.

Also discovered alongside the sword are ancient stones, metal anchors, and pottery fragments of the coast. In an attempt to get a comment from katzin by the New York Times, he declined because he didn’t want the discovery to be all about him.

Kobi sharvit who is the director of the IAA’s marine archeology unit said that the region where the relics were found “served as a small, temporary natural anchorage for ships seeking shelter.” He also noted that the regions served as a cove used during the crusades.

When Will the Sword Be Revealed To the Public?

The crusades as you should already know are a series of religious wars that dates back to the Roman Catholic Church. Well, they didn’t just date back to the time but they were also initiated and supported by the Roman Catholic Church. Some of the wars at the time were fought between the 11th and 13th centuries when the region that now translates to modern-day Israel and Palestine were invaded by crusaders. According to the IAA, the sword will be put on display for the public eye when and after it has been cleaned, restored and researched by the body.