PC Gaming happens to be one of the best Gaming consoles right now. AYA-NEO has decided to take advantage of the opportunity and create a handheld PC gaming Device that would take PC gaming to the next level. the idea of handheld windows computers is no longer new, but the implementation is not that common. 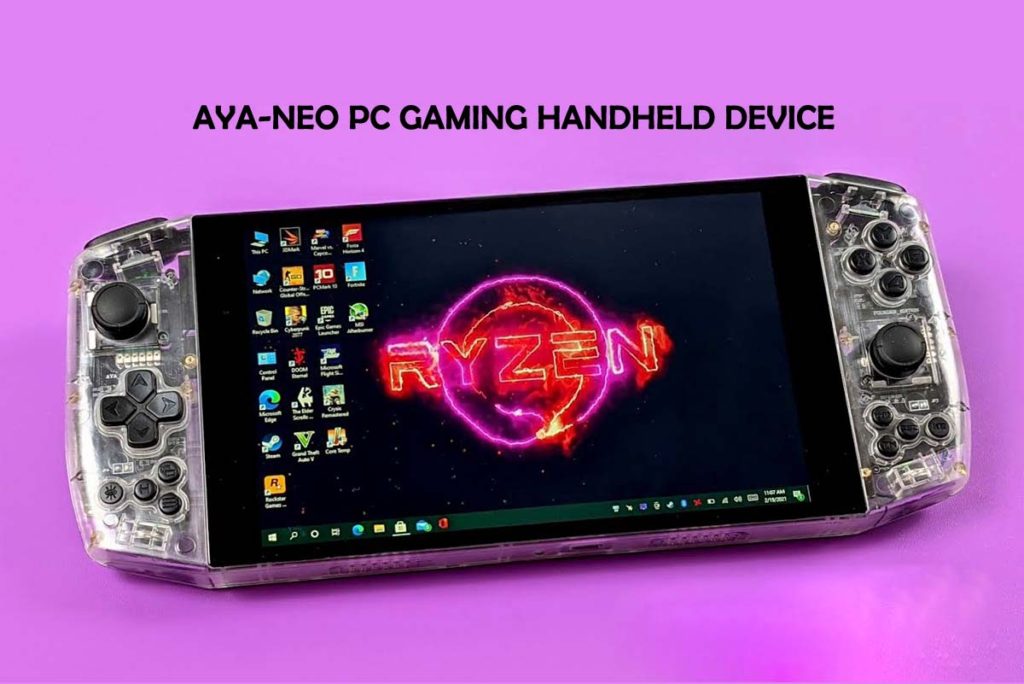 The earliest models, are mostly from GPD, and had to make do with either the less powerful Intel Atoms or, later on, beefier Intel Cores that are still created for gaming. It was only with the 11th gen Intel processors with Irjs Xe graphics that PC gaming handhelds might have to begin to get a chance but the AYA-NEO is taking an entirely different route toward a much portable gaming PC goal.

The AYA-NEO takes After the Nintendo Switch, or rather the Nintendo Switch Lite only it comes with a permanently attached controller that is flanking the screen. This design was also adopted by the GPD WIN 3 which just finished its own crowdfunding run. The key difference in this design is the WIN 3 that makes use of the Sliding mechanism in other reveal a capacitive Keyboard which, due to the reviews that came earlier, was much more of a liability than a winning feature, pun intended.

AYA-NEO PC Gaming Handheld Device comes with a deep difference, however, and the AYA-NEO possesses one other defining trait. It happens to run on an AMD Ryzen 5 4500U which comes with a mobile graphics processor. Naturally, the AYA-NEO boasts of the ability in other to run several games that would not otherwise run on the Intel-only silicon. This includes Cyberpunk 2077, although it is only available at 30fps.

The AYA-NEO also comes with a much larger 7-inch screen it comes with 1280×800 resolution and nothing more. To add to your usual game controller buttons, it has a shortcut for some of the keyboard combos and keys that are needed for some of the PC games. With gyro and the accelerometer sensors, the entire handheld can be used when controlling the games or maybe rotating the display for other games and apps.

AYA-NEO PC Gaming Handheld Device is a hefty investment as it comes in $790 for the base 521GB model on Indiegogo. The campaign happens to also offer an add-on like a dock that would turn the PC gaming into a true desktop with the required peripherals. The campaign has zipped past its funding goals with up to 28 days left to spare. But being a crowdfunded product, it would require faith and patience for you to receive the item on your doorstep.