News today from The Verge suggests that A New AI-powered List Feature has Been Added to Movies Anywhere. This feature was created for the purpose of helping you sort out your movies so you do not have to manually do that. In case you didn’t know, Movies Anywhere is one of the best-known services that syncs together purchased movies across different retailers. What this means is that you can watch movies bought on iTunes via Google Play or vice versa. 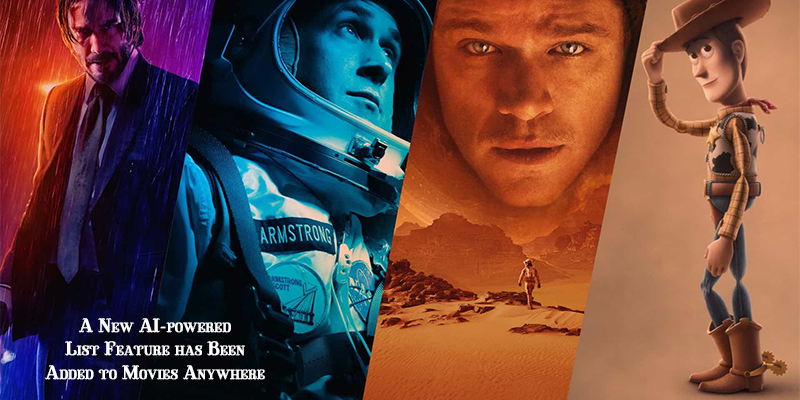 Regardless of this, the service has a fairly robust app of its own. This is the app that’s getting a new machine learning-powered list feature to automatically generate lists that sort your library based on what movies you like. With the introduction of this new feature, users are definitely going to be doing less job when sorting out their movies.

This new AI-powered list feature that has been added to Movies Anywhere is called “My Lists”. Now, this “My Lists” feature offers two options. These two options are to automatically generate lists (for instance it could compile a list of all Fast and Furious movies) or a standard user-created list.

While this feature is set like this, users will still be able to edit automatic playlists (deciding whether they want to add or removes movies they feel do not belong in the collection) and these lists will automatically update over time when newly purchased movies are added to your library.

How Does the New AI-powered feature (My Lists) Work?

This amazing feature works in quite a remarkably simple way. The platform (Movies Anywhere) has already created thousands of these automatic playlists. What it does afterward is that it scans its users’ libraries of purchased movies and using both the title of the movies and watch history select what it thinks are the most relevant playlists to show (this is where the machine learning comes in).

Right now (August 24, 2021), the “My Lists” feature is considered to be the latest addition to a series of updates that the company has added to its app. This update follows the addition of other features. An example of these other features is the Screen Pass and Watch Together feature.