The iPhone 13 mini, currently the best small phone developed. Apart from its size, it is so indistinguishable from the iPhone 13 pro max. Despite its exclusive features, it is not all expensive compared to its counterparts and it’s the cheapest among the iPhone 13 series. Integrated with astounding features, they are so many things you would love about the iPhone 13 mini and I would be stating 7 of them. 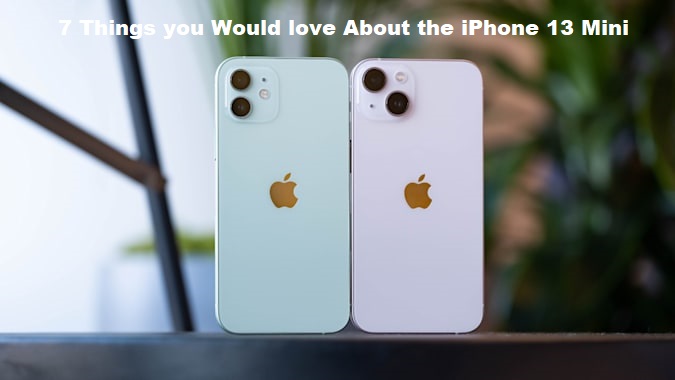 This would bring great excitement to those iPhone users who are in love with a small screen. On top of that, Apple still has it have the same features as the pro max except for a slight difference in the battery life yet the iPhone 13 mini lasts long. This is quite fair for those small screen lovers as they don’t have to buy the bigger version to enjoy a better experience which has to be the iPhone principle but now offers the same experience.

Despite being the cheapest among the four iPhone 13 series, it still performs effectively as the bigger series. As a matter of fact, there are lots of things to love about this small but mighty device. Since its launch, no other phone has outranked it as being the best small phone ever created. This has become many people choose because of its exclusive features and we bring to you the 7 things you would love about the iPhone 13:

Normally, we expected a lower version of the cameras’ quality comparing the mini version and that of the pro which is a normal trend for most manufacturers including android device manufacturers. But apple did a turnaround and no one expected it, whether it will be constant – we don’t know what Apple has for us still. Having a 12-megapixel both wide and ultra-wide creates less noise and neutral tone in the images.

The battery life of the iPhone 13 mini is long-lasting as the Pro but having a slight difference. According to Apple, it lasts 1.5 hours more than the previous series and the pro is up to 2.5 hours more. This is due to the fact that it has a bigger battery size despite its small nature. According to PC Mag, the iPhone 13 mini was tested and lasted about 12 hours and 20 minutes.

As my friend would call it ‘a pocket-friendly design. The iPhone 13 mini is no doubt the smallest of them all but also mighty as the other remaining three of the 13 series. It is so handy due to its small size and makes it easy to find things in your pack as it reduces the cluster that might arise. As such, you can go for a run having the device in your bag, including your keys, air pod case, and other petty stuff, and still, the load feels light.

Operating the device can be fun. Due to its tiny size, one-hand typing has been made interesting as well as scrolling and swiping. Unlike the bigger counterparts which have a larger screen bringing about a wide area of operation but with the smaller version like the mini, operating the phone is not stressful at all letting you enjoy a sweeter experience.

According to Apple, you don’t really need to go to film school if you haven’t as the iPhone 13 mini has undergone such a process already. Apple presents to you what they call cinematic mode which is one of the filmmaker techniques called the ‘rack focus’. This same technique can also be applied on iPhone to your videos.

The world is forging ahead rapidly and has surprisingly moved from 4G to 5G. With the 5G enabled network, browsing has been made faster. Also streaming and downloading as well are not exempted. Due to the enabled 5G on the device, you get to enjoy uninterrupted multiplayer gaming, AR videos, and lots more. You don’t need to fear the battery usage as it has been set to downshift for power saving if the network speed is not of use.

The Operating system iOS 15 is unbelievable

A lot of changes are being made to the OS. Like the redesign of Safari providing easier browsing and a better tab organization. Due to the updates, finding a particular picture is quite an easy one, so also a little bit of tweaking in the maps and weather applications. Moreover, a message as well-received a few touches as an old chat between you and your friends can easily be located using ‘Shared With You’.