YouTube to ban videos perpetrating vaccines misinformation. The video streaming platform YouTube on Wednesday said that it will no longer allow videos on the platform that claim approved vaccines by the health authorities do not work or are rather dangerous. 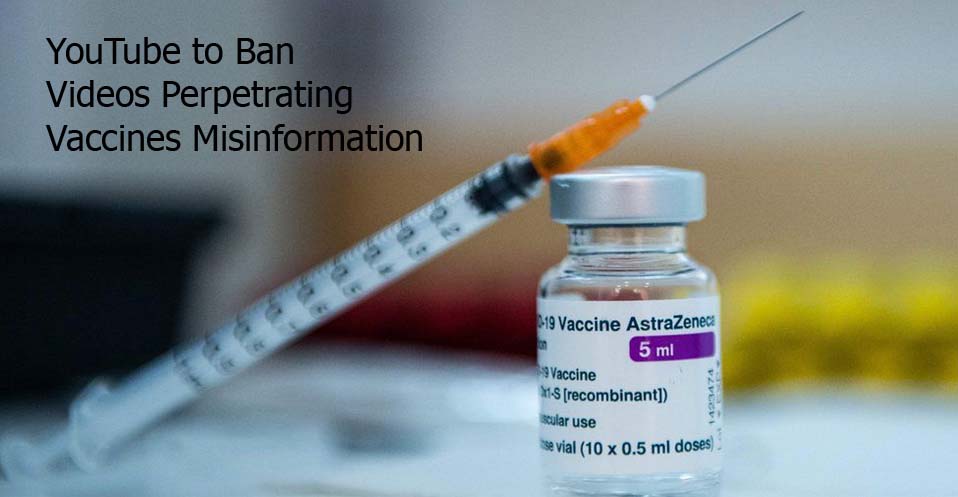 This was said in an attempt to stop the flow of anti-vaccine misinformation on the streaming platform. Asides from banning or taking down videos, the platform is also banning prominent vaccine accounts such as the Robert F. Kennedy Jr.-linked children’s defense fund and josephs Mercolas channels.

In 2019, YouTube removed ads from anti-vaccination content. The platform also continued to say in October 2020 that it would remove videos the promoted misinformation surrounding COVID-19 vaccines.  The new policy does not only tend to COVID-19 vaccines alone but it will also be expanding to other vaccines including the HPV vaccine, the flushot, measles, mumps, and rubella (MMR) vaccine.

Under the new policy, videos that claim that the MMR vaccine causes autism or the flu shot causes infertility will be removed from the platform.

Exceptions to the New Rule

There are however some exceptions to this new law. The platform says that it will still let videos that include people sharing their personal experiences with the said vaccines. But however, if the channels the said videos are uploaded promotes misinformation regarding vaccines, the content will be removed. Videos will also be allowed according to the new guideline if the video contains context from medical experts.

A spokesperson from YouTube earlier told the verge that the platform also is terminating the channels of major anti-vaxxers. And this is including Erin Elizabeth, Sherri Tenpenny, Joseph Mercola, and the children’s health defense fund. The spokesperson also confirmed that the channels of two other prominent figures in person of Rashid Bhuttar and Ty and Charlene Bollinger were terminated over a few months ago.

Thes figures mentioned are part of the disinformation dozen: A group that is identified by the platform for countering digital hate is responsible for the bulk of misleading claims about vaccines on various social media platforms.

What YouTube’s VC Had To Say?

The vaccine policies were expanded by YouTube after noting that the misconception around the COVID-19 vaccine, YouTube’s vice president of global trust and safety, Matt Halprin said to the Washington Post. The backlash surrounding COVID-19 vaccinations has been targeted to include other vaccines over the past few months.

The Tennessee Department of health even temporarily suspended outreach around childhood vaccinations this summer. A state senator in Florida said he wants to review school vaccination requirements.

Facebook also has expanded its vaccine misinformation policy early in February to stop claims that the shots are dangerous.