Recently, the Xbox Series S is now seen to be a Threat to the PS5. The Xbox Series S was created to be an affordable entry point into the Xbox ecosystem and next-gen gaming. meanwhile, some people might argue that a commonly found resolution of 1080p in the majority of titles would not qualify as a true generational leap. It is not that easy to deny that Microsoft’s all-white Xbox hasn’t achieved its lofty goal. 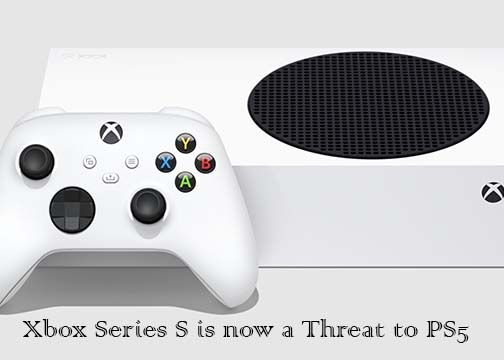 Xbox Series S is now a Threat to PS5

The Xbox series S can run the graphically intensive lighting and reflection technology known as ray tracing; it is able to bring out games at 120fps, and its blazing-fast load times all thanks to its 512GB internal SSD drive. You can choose to purchase the console and play all the latest blockbuster titles on it, which includes the Call of Duty: Black Ops Cold War, Assassin’s Creed Valhalla, and the even true next-gen Xbox exclusives like The Medium.

Resolution qualms and framerate counting aside, then the Xbox series s is really a fantastic proposition for all those that want to have a next-gen console that is not so expensive, as long as you are prepared to accept some of its caveats.

You can also argue that the Xbox series S does not do enough to sway fans of PlayStation hardware over to the green side. The price differential between Sony’s PS5 Digital Edition and the Xbox series S is not significant enough to justify selecting the machine over the PS5 digital edition, which is essentially a PS5 that is without a disc drive. Why pay $299 / £249 / AU$549 for the Xbox Series S, when you can acquire the PS5 Digital edition for $100 more.

The Rise of Xbox Game Pass

The Xbox Series S was always expected to be buoyed by the Xbox Game pass, then. And I’m sure that being able to have access to every single title from the Xbox Game studios on day one, like Halo Infinite, would have influenced a fair few people into purchasing the much cheaper Xbox purely based on the fact alone.

But the Xbox Series S’s watershed moment arrived when Bethesda games were added to Microsoft’s service as a part of the company’s acquisition of Bethesda’s parent company, ZeniMax Media. This selection was no small selection, either, featuring a staggering 20 titles, some of which are already running better than ever all thanks to the FPS Boost, a new Xbox Series X and S feature that can quadruple the framerate of some older titles.

There is also some enticing promise that the future Bethesda titles like starfield and the elder scrolls 6 would arrive on the service on day one, just like Microsoft’s first-party output.

It does not matter if you happen to be an exclusive fan, there is no doubt that they still happen to be the best way for you to sell consoles and entice gamers in other to make some changes to their allegiance to a piece of plastic. With Bethesda games now available on Xbox and PC moving forward, PlayStation owners would suddenly have to deal with the prospect of games and series that might have made them excited for no longer being available. And that, in Itself, is a much greater pull than Microsoft launching another Forza Motorsport or Gears game.

Now, I am not stating that people would begin trading in their PS5 consoles, but what the Xbox series S could actually become is a perfect companion console to Sony’s machine. Much like how in every Xbox 360 and the PS3 household, you would often find a Wii, the Xbox Series S has the potential to reach an audience that would simply pay $499 / £449 / AU$749 for a box that does practically the same thing just as the PS5 that they purchased.

A lot of people are picking up an Xbox series S in other to act their “Bethesda Box” which happens to be a testament to how beloved series like Fallout, Skyrim, Doom, Wolfenstein, and The Evil Within are.  And when they also find out that they would be getting more at Microsoft’s first-party out-put, big third-party games like the Outriders and mores as a part of their subscription, it’s hardly surprising that the Xbox Series S has entered the equation.

The console is not suddenly just a cheap entry point into Next-gen and the Xbox ecosystem. It happens to be an avenue for the Playstation fans in other to ensure that they can still play Bethesda’s Upcoming games without having to make another sizable investment. As a consequence, they will also be offered countless Xbox games that they might have just ignored and the incredible value proposition that is the Xbox Game Pass.

This should worry Sony – not just because they are likely to lose out on sales concerning the PS5 but because the project of making a payment of $70/£70 for a game when compared to $10/ £8 per month is hard to justify. It would also attract more people to the already 18 million Xbox Game pass subscribers that Microsoft is focused on building as opposed to shifting Xbox Series X consoles.