Windows 11 Preview Build 22557 Came with New Features for Insiders. Microsoft has recently announced the arrival of the windows 11 preview build 22557, though it is only available to developers who are part of the company’s Insider program. 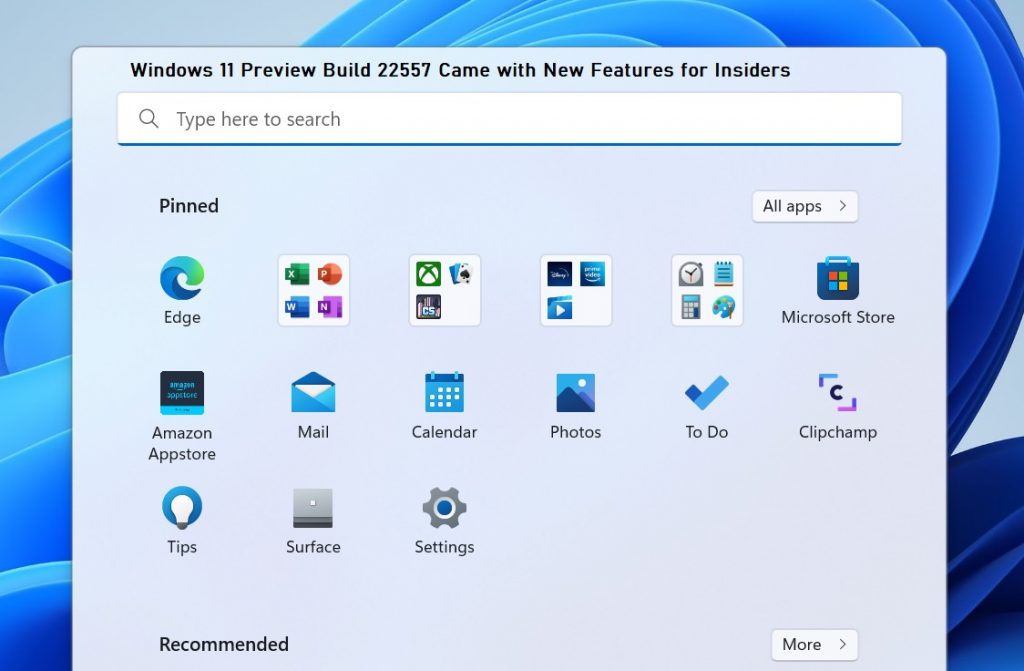 According to Slashgear, Users that have access to the latest drop to test out a bunch of new Windows 11 features, not the least of which happens to be a live caption, plus there are major updates to the phone app for Android users and “general improvements” That makes the windows 11 run a lot better entirely.

Windows Insiders that have to check if the new preview build would be required to find some new features that are not yet available to the much wider windows 11 userbase. and it includes the arrival of:

Although the update comes with a lot of features, some of them actually might be more notable than others. Touchscreen users, for example, would be excited to discover that Microsoft is bringing in some new gestures that would make navigation a lot easier within windows 11 when using a tablet or other touch-based display.

Users get to now swipe to pull up and get rid of the start menu, plus there’s the interesting new ability for users to swipe between the “Recommended/More” and “Pinned/All” apps that are in the start.

Similarly, users are expected to swipe up from the right side of the taskbar in other to retrieve the quick settings menu, then swipe down again and close it. The Same gestures now work for the notification center, too plus there are some new “grippers” That appear in full-screen apps, meaning that you would not have to deal with swiping accidentally out if an app going forward.

Gestures aside, the windows 11 preview build also offers “Pin to Quick Access” to all “supporting files,” what this means is users will no longer get restricted to just pinning folders.

Another interesting addition is this latest preview build that brings in the windows 11 focus settings, which was meant to help users quiet down notifications and other distractions so that they would be able to finish up with what they are doing.

Building upon Focus Assist, users get to make use of focus (found in the notification Center) in other to choose a specific duration for focusing, then start the session when they are ready to work. During that period of focus period, users get to see a focus timer on the screen, do not disturb will turn on, and all distractions like flashing apps and taskbar bagging would disappear temporarily.

Android Users get a Special Treat

To add, the new features and general improvements, Microsoft stated that your phone app for Android users gets to offer a much better experience right under the preview build.

Windows 11 insiders that get to make use of this app, which offers access to their Android phone directly on a laptop or even on a desktop, can view their three most recently used apps just by clicking “your Phone” right on the taskbar. If you launch the app fully, you will find a new “recent apps” section, assuming that you are running a minimum of at least version 1.21092.145.0. there is one major catch, however.

Microsoft stated that their new section is dependent upon “a deeper level of integration” with the Android phone. As such, Microsoft has been working with Samsung to usher in some new features of its smartphone, namely one found in the Note, Galaxy S, and Galaxy Z Fold/Flip lines. Only insiders that happen to own one of these supported phones will have access to this new feature.