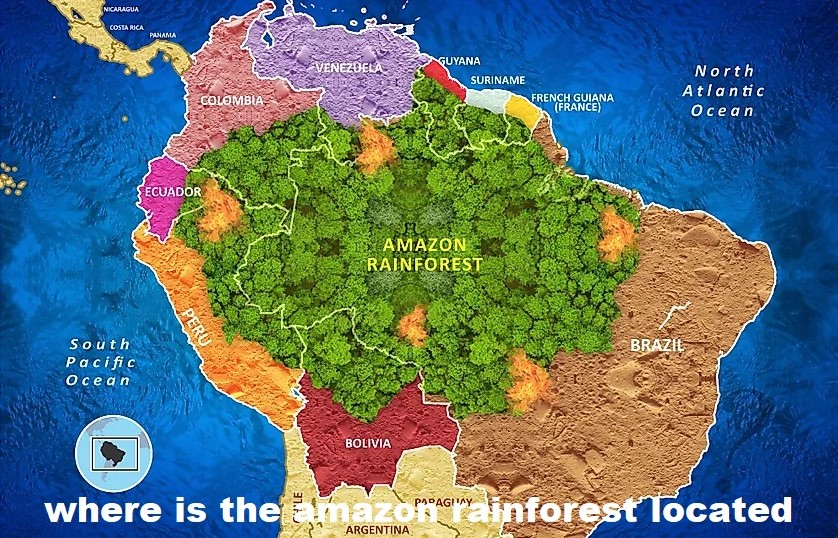 It’s so fascinating, cone to think of it – the amazon rainforest, where is it located? We would soon find out. The landmass is so massive which is approximately 634 million hectares and about 83% of it is the rainforest itself.

As a matter of fact, one amazing fact about its landmass is its comparison with the lower 48 being that they are of almost the same size. Based upon this fact, it is the largest rainforest followed by Congo.

People from around the world come to this place to study and gain experience from the amazon rainforest. There are lots of things to learn from this rainforest and besides, it has been and still is, a great help to humanity.

Where is the Amazon Rainforest located?

The amazon rainforest is known by different names such as The Amazon Jungle, The Lungs of the Earth, Amazonia, and many more. Based on its location, it houses 3,344 indigenous territories and is owned by nine nations; all with their various portions of the land.

The rainforest itself covers most of the Amazon basin in the South America Continent. Having more than 30 million people living in the habitat divided into 350 ethnic groups.

The major part of the Amazon Rainforest is possessed by Brazil having roughly 60% of it, and then Peru holding 13%, and after that Columbia holding 10%. The remaining 6 are Venezuela, Suriname, France, Guyana, Ecuador, and Bolivia having smaller portions.

Long since the amazon jungle was home to humans and presently, millions of people are living in cities across the land. Although, there are still locals who have their homes located far deep into the jungle freely.

The Great Importance of the Amazon Rainforest

The amazon rainforest really plays a great role in climate change in the local and regional area as there is a great exchange of water and energy between the atmosphere.

Earth’s climate and ocean current flow are affected by the quantity of water released into the atmosphere by plants through evaporation and plant transpiration, and subsequently into the ocean through rivers.

The Amazon rainforest serves to regulate the earth’s climate by storing carbon; it offers a home for wildlife, and it aids in the maintenance of the water cycle by creating rainfall on a local and regional level.

It also offers food, fiber, shelter, and medicine; it gives social, religious, and cultural significance; and it sustains jungle folks, including native tribes dwelling in choice seclusion from the rest of mankind.

Humans have employed insects, plants, and other species in the region for generations for a variety of purposes, including agriculture, textiles, and, of course, sickness remedies. Native tribes like the Yanomamo and other mixed-race cultures have mastered the usage of active ingredients found in plants and animals.

A medicine man generally has experience of how to use natural herbs, and he passes on this heritage to another, a tradition that has been carried on for generations and is an important part of the people’s culture.