What was the first 3D printed part in space? A collaboration between Made In Space Inc. (MIS) and National Aeronautics and Space Administration (NASA) that changed the world making everyone be overcome by awe. 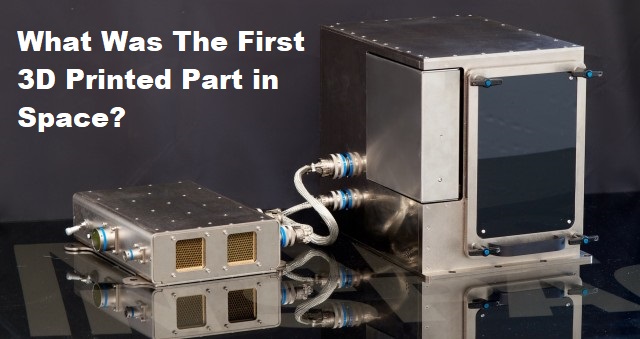 This event arises new contingency for producing parts in outer space and the open roads for more development that will lead to humans living and working in space. This collaboration led to MIS being the first to uplink a printing part and also print a part in space. The printer used for this mission was a Zero Gravity Printer which was the first one made and actually sent to the International Space Station (ISS).

What was the first 3D printed part in space? – Behind the scene

It all began in California at the Ames Research Centre holding the first office of the MIS having the main objective to print 3D parts in space. Despite the insufficiency in facilities, a great goal has they set to accomplish what will bring an inspiring shock to the world later on. A team of four who work tirelessly for about 14 – 16 hours a day, all in a room considered not large was where the creation of the Administrative Manufacturing Facility (AMF) will aboard the ISS in the future.

They were highly prepared to set plans against any failure that might occur in the short or long run. As a result, helping them reduce as much risk they face during the project. It was like a preparation for a battle but this time it was something else – an innovation. Three print units were put into practice; one on the ISS, the second on a backup flight, and the third were on the ground. All to achieve a positive result.

Despite the high level of preparation they’ve made for the project to commence, there came a failure where a supplier delivered low-quality materials during a crucial period in the project. Based upon the high level of preparedness, they were able to alleviate such risk. So as to prevent another from happening, an RV was selected to be used for the safe arrival of the payload at Alabama all the way from California. This was actually the conveyance of the first unit.

A goal they’ve all been striving for not knowing they were off to make history. It was something that wasn’t part of the project but was of an emergency at that point in time. As a matter of fact, the 3D part wasn’t the first part printed – it was a part required for the 3D printer. After the successful printing of this part, they showed a great feeling of extreme happiness.

Then, there it was, the provision of immediate attention was needed for a crew member who had its wrench misplaced. Based on the crucial need, they had no option other than to change the last part ought to be printed to a wrench. This was made possible through the assistance of NASA who uplinked the 3D-printed part to space.