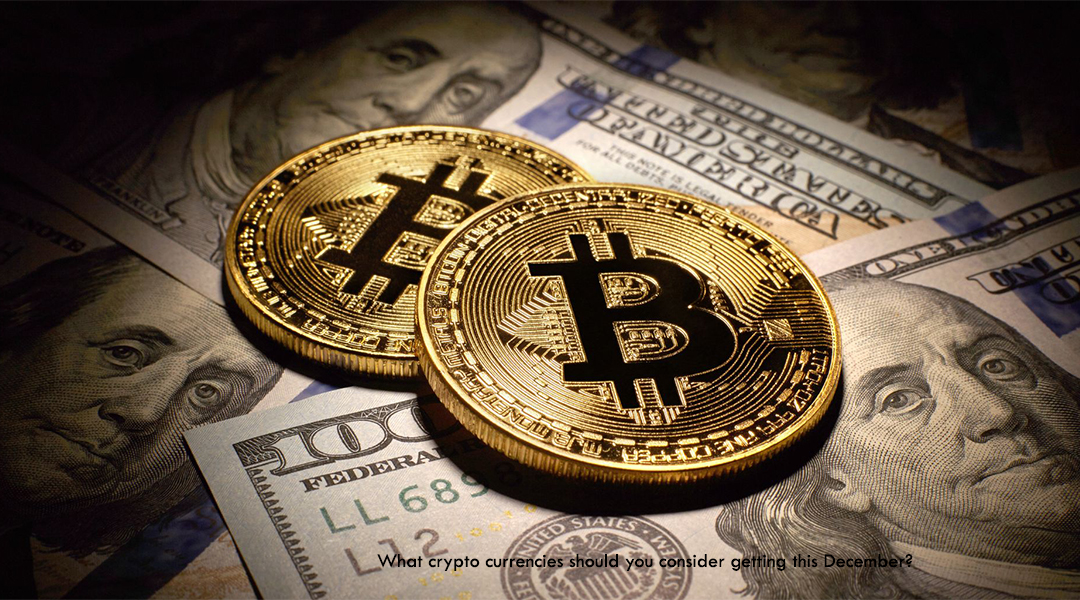 What crypto currencies should you consider getting this December?

As you would expect, the Altcoin market also lost 33.91% in October 2021 from approximately $1.1 trillion to currently stand at $1.47 trillion at the end of the month.

Although the cryptocurrency market was on a downtrend before the new variant was found, the growth and spread of this variant make prove well to hamper economic recovery in both developed and developing economies.

With many coins in the cryptocurrency market trading at a discount, these 5 cryptocurrencies are what investors should watch out for in December 2021.

Bitcoin broke all-time highs at the beginning of November and saw its market capitalization trade over $1.3 trillion. However, it has dropped to 7th place, as Elon Musk’s Tesla overtook according to Asset Dash due to market sell-off as Bitcoin traded as low as $53,569.76.

As a result of the Omicron virus, Bitcoin’s exchange flow turned positive, indicating that investors are selling their holdings, Glassnodes reveals. In the previous week, the exchange revealed that BTC had a positive flow of $427.6 million.

However, many believe that we are at the last phase of the bull market and that the market is now in a state of bull market distribution. William Clemente, an on-chain analysts’ expert, explained the macro aspect of Bitcoin.

He said this earlier in the month and used the ‘Long-term holder net position change’ to explain. He further stated, “Essentially means we are entering the main phase of the bull market.”

Polkadot is an open-source sharing multichain protocol that facilitates the cross-chain transfer of any data or asset types, not just tokens, thereby making a wide range of blockchains interoperable with each other.

Earlier in the month, DOT hit an all-time high of $55 at the start of November but has quickly retraced as a result of price action from Bitcoin’s market dominance.

The third auction ended on the 2nd of December and Astar, a DApp hub on Polkadot that aims to be a multi-chain smart contract platform that will support multiple blockchains and virtual machines, is favored to win its leads, having received 9.4 million DOT tokens as of the time of this writing.

Sandbox is a blockchain-based virtual world allowing users to create, build, buy, and sell digital assets in the form of a game using its native token called the SAND token.

Sandbox was launched in 2011 by Pixowl and is built on the Ethereum ecosystem. It combines the powers of decentralized autonomous organizations (DAO) and non-fungible tokens (NFTs), to create a unique decentralized platform for a thriving gaming community.

On the 29th of November the platform opened up part of its metaverse after four years of development, to 5,000 players for the first time via a multi-week, play-to-earn (P2E), Alpha event called The Sandbox Alpha.

Even with Bitcoin’s price action, it did not stop the SAND token from hitting an all-time high of $8.51 on the 25th of November. Although the token has retraced in price, there is still more room for growth as more investors are trying to get their hands on the metaverse ecosystem, following Facebook’s name change announcement.

Sandbox’s token, SAND is currently trading $5.97, down 4.3% as of the time of writing this report.

Avalanche is a layer one blockchain that functions as a platform for decentralized applications (DApps) and custom blockchain networks. Its network consists of three individual blockchains: the X-Chain, C-Chain, and P-Chain.

Each chain has a distinct purpose, which is radically different from the approach Bitcoin and Ethereum use, namely having all nodes validate all transactions. Avalanche blockchains even use different consensus mechanisms based on their use cases.

At the beginning of the month, the Avalanche Foundation launched “Blizzard”, a fund offering more than $200 million to developers as an incentive to build on the Avalanche network. According to the announcement, the fund will provide liquidity to those early-stage projects that innovate decentralized finance (DeFi) applications, nonfungible tokens (NFTs), and other products on Avalanche.

Also, the AVAX token made its way into the top 10 by market capitalization in November, flipping Dogecoin and Shiba Inu. This was because a partnership announcement with Deloitte, one of the ‘Big Four’ accounting firms. Deloitte has decided to build its disaster relief platforms atop the Avalanche blockchain platform.

Crypto.com is one of the world’s largest cryptocurrency exchanges. The platform touts selling over 200 cryptocurrencies at ‘true cost’.

Recently they launched their blockchain called Cronos and the main net launch was on the 8th of November. The price of CRO, the native token of crypto.com rallied to an all-time high of $0.9698 on the 24th of November. The CRO blockchain serves primarily as a vehicle that powers the Crypto.com Pay mobile payments app.

Cronos is the EVM chain running in parallel to the Crypto.org Chain. It aims to massively scale the Defi ecosystem, by providing developers with the ability to instantly port DApps from Ethereum and EVM-compatible chains, with funding from Particle B’s $100m EVM fund and access to the 10M+ user base of the Crypto.com ecosystem.

Conclusively, investors should expect the best from these coins while being careful because the Crypto world is full of surprises. That’s it for this article What cryptocurrencies should you consider getting this December? Further research can be done on Google.