Were the rumors circulated before the apple showcase event wrong? If you followed apples big event before the d day, then you should have also learned of the many rumors that aired before the event. And now that the event is over, the question on the lips of everyone at the moment is what went wrong? In truth, most of the rumors were wrong. 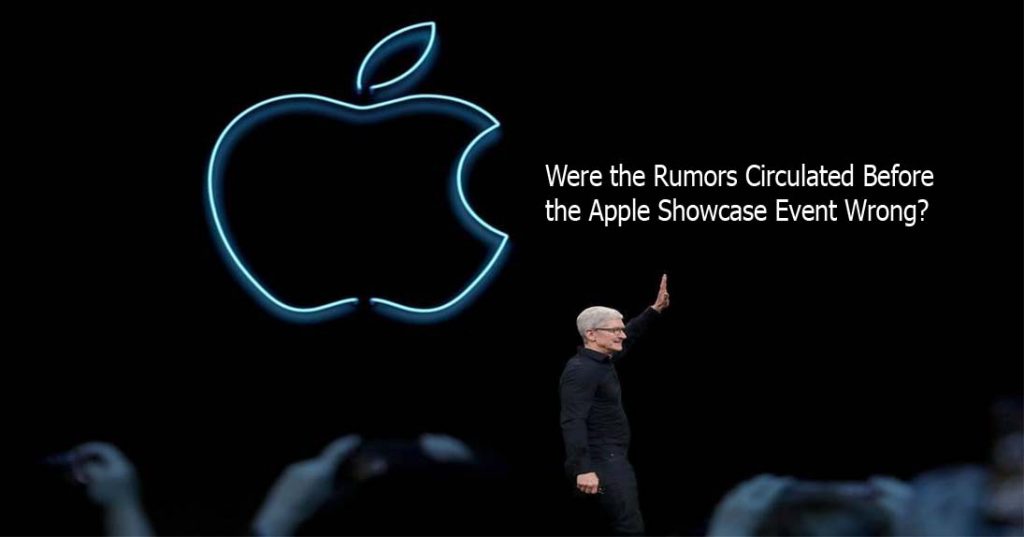 Were the Rumors Circulated Before the Apple Showcase Event Wrong?

Prior to the event, it was rumored that there would be new AirPods and also there would be big changes to the watch among others – but guess what? There weren’t! There were big surprises following the Apple event on Tuesday no doubt. But this is not because there unexpected announcements, but because we didn’t see what we were expecting. It’s that simple. Rumors regarding events like this were almost accurate, but with this one, they aren’t.

Some of the Disappointments

The apple watch for example was rumored to get a complete redesign, a design featuring a flat-screen and flat edges. The designs were even seen at renders, leaked by CAD files (a tool that serves as a 3D blueprint for products). It was even reported by notable apple reporter mark Gurman two days prior to the event. And although the apple watch brought upon stage did have some tweaks, it was nothing compared to what was expected via the rumors.

Notable analyst Ming-chi Kuo also reported that a new set of AirPods redesigned to have shorter stems would be debuted by apple just days before the event.  Gurman also rumored the same thing for months and alleged pictures were even leaked online. Online publications however noted that production for the AirPods would start in August. But maybe the timing for the event was off and apple will eventually release them at a rumored future event, who knows.

The always-on display feature that has been on android phones for years now that was suggested by Gurman was not announced by apple. The rumor was also backed up by leaker Max Weinbach. There were some notable weird rumors this time around, however. Kuo, just a few weeks to the event wrote that the iPhone may have a feature that gives it the ability to communicate with satellites. This feature will make users make calls and even send texts without cell service.

Bloomberg also backed up the claim in its own version just the next day after Kuo wrote in his report, saying that Apple was working on a satellite communications feature for emergency use only. It also added that Apple may have hardware for it but probably not software. However, when the iPhone 13 spec page opened on Apple’s website, no mention of the rumor was found.

Accurate Rumors and Leaks Regarding The Event

Rumors regarding the iPad mini redesign, high refresh rate iPhone display and a smaller notch, and the cinematic camera mode were all true. With this, it isn’t to say that the place of rumors isn’t valid – it can be exciting to know about a thing or two on what’s coming next.