Toshiba’s New 4k Fire TVs Could Beat the Amazon’s Picture Quality. One of Amazon’s Fire TV partners recently declared a new model that might surpass the tech giant’s own self-branded TVs that launched only weeks ago. 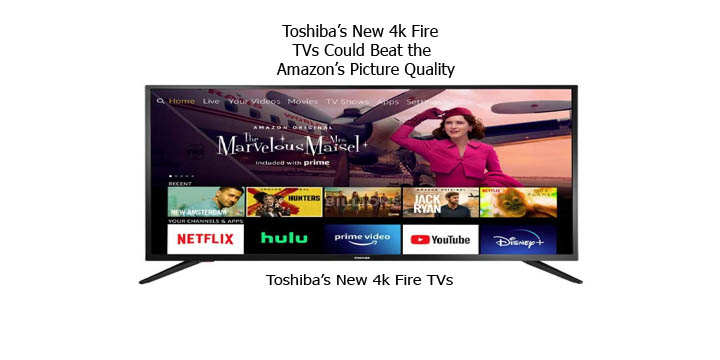 Today Toshiba is said to be introducing the first Fire TV 4K TVs to feature local dimming, a backlight technology that will be producing improved contrast and black levels compared to the direct LED method that was used by cheaper sets and Amazon’s new Fire TV Omni series.

According to the verge, Toshiba says the new M-Series contains “up to 48” dimming zones. The TV comes in 55, 65, and 75-inch screen sizes. So assuming that 48 numbers apply to the biggest model, it’s not exactly going to compete with high-end Vizios or TCLs, which pack more dimming zones into their backlighting systems.

But it should still make for a significant improvement to overall picture quality. Despite including features like Dolby Vision on its largest-size Omni sets, Amazon didn’t build full-array local dimming into the devices.

As the name suggests, local dimming allows the backlight to illuminate and dim at different areas of the display based on the content, so dark scenes appear the way they should without everything looking gray.

The new M-Series Fire TVs from Toshiba also has a “120Hz native panel,” so we don’t know whether this means they’ll indeed support more fluid gaming from the Xbox Series X, S, and PS5.

As more sets with local dimming (and eventually maybe even Mini LED) are released, TCL’s higher-end Roku and Google TV sets might finally start to get some real competition from the other side.

As of August 2020, the company is no longer producing any laptops under its own brand name. Toshiba first made laptops in 1985, but its manufacturing business has been wholly sold to Sharp, making them under the “Dynabook” brand name.

Is Toshiba a Good Brand of TV?

The short answer is yes: Toshiba makes perfectly capable low-spec televisions, and the Amazon Fire TV platform will be several times better than the kind of proprietary smart TV operating system you’d usually get on TVs at this price.