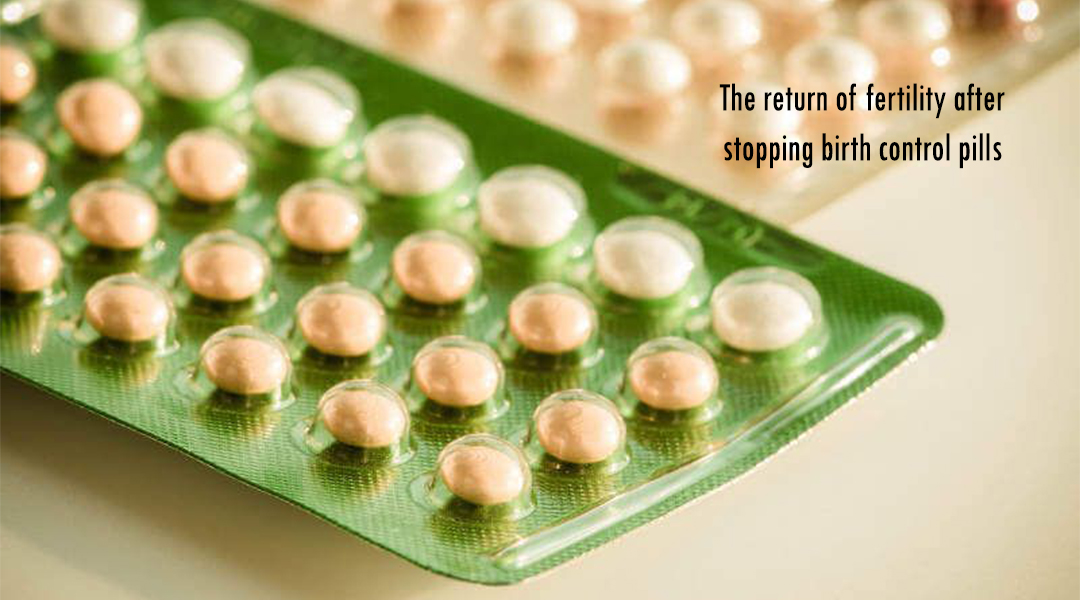 “I tell my patients not to stop their birth control until they’re ready to get pregnant,” says Dr. Leena Nathan, an OB-GYN at the University of California, Los Angeles Health. Whether it’s the IUD or the pill, most people return to their normal fertility “pretty much immediately,” Nathan says.

There is no fertility latency period for the various birth control pills, therefore, some patients who stop birth control conceive before their first period off the pill and the case may be different for others, Nathan says.

The Return of Fertility after Stopping Birth Control Pills

Birth control pills are of different types, some can either have a combination of two hormones, estrogen, and progestin, which work primarily by stopping ovulation, or progestin-only pills (also called the “mini-pill”) which mostly work by disrupting fertilization through changes to the cervical mucus and uterine lining.

With either pill, you’re safe to start trying to conceive immediately after you stop taking the pill, Nathan says. (In other words, they claim that you need to wait three months is a myth.)

It is advisable to start another birth control pill if you just stopped one and you don‘t want to conceive immediately (if you are having sex with someone who produces sperm ). Also, if you’re starting a new hormonal birth control method, like the pill or a hormonal IUD, it can take up to a week to become effective at preventing pregnancy.

Apart from preventing pregnancy, birth control pills are also used for reducing period pains. Dr. Shari Lawson, assistant professor of gynecology and obstetrics at Johns Hopkins University School of Medicine, says that sometimes patients have been on the pill for so long, they forget the reasons they started it in the first place.

How long till I’m fertile after taking out my IUD?

If you are using any type of IUD, you can start conceiving immediately after the IUD comes out. The copper IUD prevents fertilization because the copper it releases is toxic to sperm, so it never stops ovulation or your “real” menstrual cycle, it only inhibits the sperm. The IUDs with hormones, such as Mirena, sometimes stop ovulation but mostly work because the progestin they release thickens the cervical mucus and thins the lining of the uterus.

The only method that can delay someone’s return to fertility is Depo Provera, Nathan says, which is an injection or shot of progestin you get at a doctor’s office. According to the Mayo Clinic, it might take as long as 10 months for ovulation to resume after stopping the shot (but it could start much sooner).

Barrier methods such as condoms don’t prevent pregnancy once you stop using them. As far as the NuvaRing or “the patch” is concerned, these methods release the same hormones as combination birth control pills, meaning they temporarily stop ovulation and it will quickly resume again for most people. Fertility after removing your birth control implant, Nexplanon, also resumes as soon as it’s taken out.

The copper IUD (Paragard) doesn’t use hormones to prevent pregnancy. Other IUDs release small amounts of the synthetic hormone progestin, which mimics the natural hormone progesterone.

How long does it take to get pregnant?

If you have regular cycles (occurring every 24 to 34 days), Lawson says, and you’re engaging in “regularly timed intercourse,” you have an 85% chance of conceiving within a year. For a person under the age of 35, it could take up to the first ten months to conceive. Patients in this group are given a year of actively trying to get pregnant before an evaluation for infertility is recommended.

For patients who are age 35 and up, you are recommended to try for six months, then go in if pregnancy hasn’t happened. Pregnancy becomes a little more difficult after 35 because egg quality normally reduces about this period.

Apart from age, other factors like polycystic ovary syndrome, endometriosis, and having a past pelvic inflammatory infection can make pregnancy more difficult. Some lifestyle factors, like alcohol consumption, exercising too much, and smoking can also impact someone’s fertility, according to the American College of Obstetrics and Gynecologists.

According to the ACOG, health professionals estimate one-third of fertility issues stem from the other partner, most commonly with their sperm.

Aside from chemical pregnancy, early pregnancy loss in general (also called miscarriage or spontaneous abortion) occurs within the first trimester (13 weeks) of pregnancy, and happens in about 10% of known pregnancies, according to the ACOG.

Are you more fertile after birth control?

Lawson says that while it’s not likely, there’s information that suggests that being on a combination birth control pill that suppresses your ovaries raises the “possibility that you may have more than one ovulation event,” meaning two eggs could be released and the likelihood of at least one of them getting fertilized is greater.

Infertility doctors may also put their patients on birth control pills to keep their uterine lining “nice and clean” prior to pregnancy initiation, Nathan says. But for the average patient? “That’s a myth,” she says.

Conclusively, utmost care is required while taking care of birth controls and pregnancy issues, it is advisable to be alert on any issues concerning such, while we may expect conception after the halting of the birth control process, there may be delays, our body systems are different.