SpaceX Successfully Brings Crew of Four Home from the International Space Station. A crew of four astronauts successfully returned to Earth this evening, splashing down in the Gulf of Mexico off the coast of Pensacola inside a SpaceX Crew Dragon capsule. 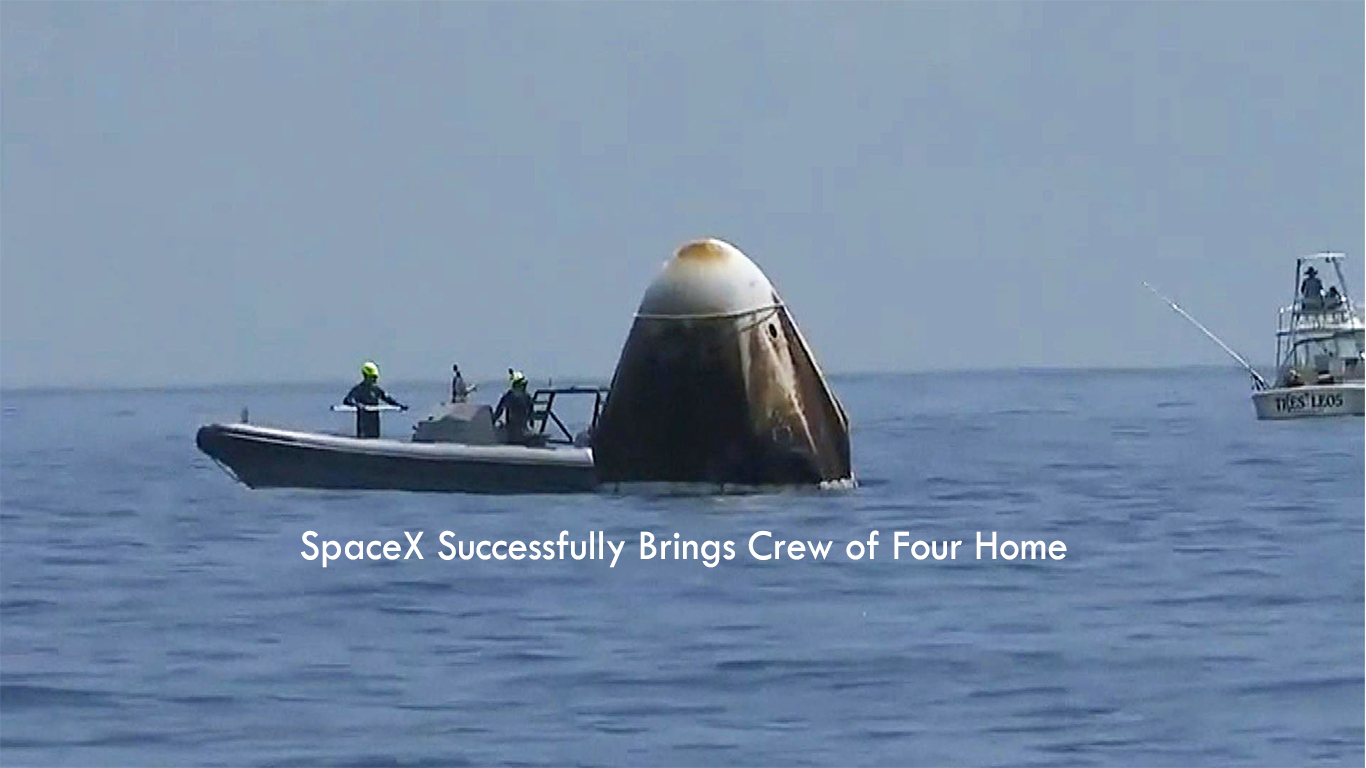 Their arrival back on the planet brings an end to a more than six-month-long stay aboard the International Space Station, and it paves the way for another crew of four to launch to the ISS in the coming week.

According to the verge, the group launched to the space station on April 23rd atop a SpaceX Falcon 9 rocket, part of a mission called Crew-2.

“On behalf of SpaceX, welcome home to planet Earth,” a SpaceX flight controller declared when the crew splashed down. SpaceX personnel on a recovery ship will now hoist the Crew Dragon out of the water and help the crew leave the vehicle.

Their flight marks the third time that SpaceX has launched people to the International Space Station and then safely brought them home.

Such trips are part of SpaceX’s contract with NASA through the space agency’s Commercial Crew Program, an initiative that tasks private companies with ferrying NASA’s astronauts and international partners to and from the ISS.

SpaceX launched its first crew of two to the station in May 2020, part of a test flight to prove the safety of its Crew Dragon capsule, designed to launch on top of the company’s Falcon 9 rocket.

That flight was followed by SpaceX’s Crew-1 mission in November 2020, which sent a crew of four to the ISS for a six-month rotation.

Now that Crew-2 is back on the ground, SpaceX will quickly pivot to its next crewed launch, aptly named Crew-3.

Another crew of four including NASA astronauts Raja Chari, Thomas Marshburn, and Kayla Barron, as well as German astronaut Matthias Maurer are scheduled to launch inside a Crew Dragon capsule on Wednesday, November 10th at 9:03 PM ET from NASA’s Kennedy Space Center in Cape Canaveral, Florida.

The crew will take the place of the Crew-2 astronauts who just left and do another six-month rotation up in orbit.

Because of these setbacks, the Crew-2 astronauts are back on Earth before Crew-3 arrives at the ISS. SpaceX’s Crew Dragon capsule is able to last up to 210 days in orbit, and the Crew-2 capsule’s limit didn’t end until November 19th, but NASA ultimately decided to bring home Crew-2 now in anticipation of bad winter weather getting worse deeper into the month.

Crew-2 Astronauts Back Before Crew-3 Arrives

However, there’s still a NASA astronaut onboard the ISS to help ease the Crew-3 astronauts’ transition. Mark Vande Hei launched to the station on a Russian Soyuz rocket in April and won’t come home until March 2022, marking a nearly year-long stay in orbit.

His presence on board “definitely helped us and helped me feel more comfortable in the decision to land first before we launch,” Joel Montalbano, manager of the International Space Station at NASA’s Johnson Space Center, said in a press briefing.

The Crew-2 astronauts undocked from the space station at 2:05 PM on November 8, 2021. When the astronauts first got inside their vehicle, one of the touch screens needed a reboot, but the trouble didn’t seem to impact the flight.

After they left the station, they spent a few hours flying around the ISS in a circular pattern. It was an intentional maneuver, allowing the astronauts to get pictures of the ISS from different vantage points that aren’t normally seen.

Once that fly-around was complete, the Crew Dragon began drifting away from the station, putting it on its course back to Earth.

While onboard the ISS, the Crew-2 astronauts performed more than 300 experiments, one of which involved growing Hatch chile peppers in orbit. The crew ate their creations with some tacos, helping to spice up their diet while in space.

The Crew-2 team also dealt with some unexpected moments aboard the ISS, notably when a newly docked Russian module accidentally fired its thrusters and spun the station around its axis.

10 December Birthday Gifts to Buy for Your Neighbor In 2022