Today we have the “Qualifications May Change for The New Stimulus Check” as the topic of the day. Not enough dependents were eligible for any money at all under the CARES Act, Republicans and Democrats both agree to it. Dependents ages 16 or younger were allotted $500 as a part of the family check, but new proposals from both sides of the aisle want to expand the definition of a dependent to include citizens regardless of age including college students and adult dependents.

The Democratic proposal was to extend $1,200 each, for up to three dependents, so a family of five people could receive a max amount of $6,00. The Republican HEALS Act would provide $500 for each dependent you claim on your tax return no matter how old, with no specified cap on the number of dependents people. 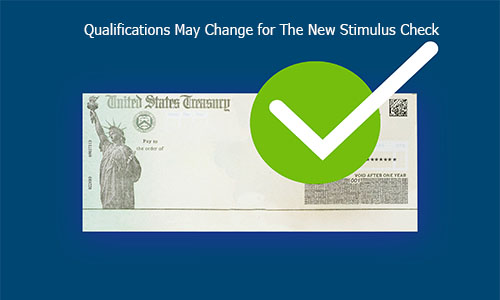 Qualifications May Change for The New Stimulus Check

There is still hope that a new economic relief package with a second direct stimulus payment could be authorized by The Congress before the November 3rd election. The House Speaker, Nancy Pelosi, and Treasury Secretary Steven Mnuchin agreed to continue on the issue, and the House Democrats are drafting a more focused bill reportedly worth about $2.4 trillion for a potential vote on October 2nd.

Washington negotiators have agreed to restart debating on the second stimulus check talks. They have not reached a deal yet, but here is the gathered information to know about the second direct payment.

CHECKOUT >>> Stimulus Check: How will Payment Be Received, Direct Deposit or By Mail

How to Find Out the Second Stimulus Check Eligibility

Likely, if the second stimulus check emerges, it will be based largely on the first paid check. It may follow many of the guidelines from the CARES Act that governed the first stimulus check, but draw some changes from the HEROES Act and HEALS Act proposals, neither of which is in law. The most important decider in setting income limits is adjusted gross income, or AGI, which determines how much of the $1,200 for individuals and $2,400 for married couples’ receivable if you meet other requirements.

Who Could Qualify for a Second Stimulus Check?

Here is a table for qualified citizens:

What You Need to Know

Who will et a stimulus check if the HEALS Act law is passed? A single US citizen with an adjustable gross income, or AGI, less than $99,000, ahead of a family earning under $146,500, a couple filing jointly without children and earning less than $198,000, a dependent of any age.

Who would qualify for a second stimulus check if the HEROES Act law is passed? Individuals who earn below $99,000 according to the adjusted gross income from their 2018 or 2019 taxes, college students, dependent over 17, disabled relatives and taxpayers’ parents, families of up to five people for a cap of $6,000 per family, SSDI recipients, non-US citizens who filed tax returns, pay taxes and otherwise comply with federal tax law using an individual taxpayer identification number instead of a Social Security number.

For more information, you can check CNET.

CHECKOUT >>> When is the Next Stimulus Check: Reasons that Could Delay the Check from Arriving Sooner