Qualcomm’s New G3x Platform Could Usher in a New Wave of Nintendo Switch Alikes. It is said that Qualcomm is upping its investment in the gaming sector with a new Snapdragon G3x Gen 1 Gaming Platform, which is said manufacturers can use to make Nintendo Switch or Steam Deck-like handheld gaming devices. 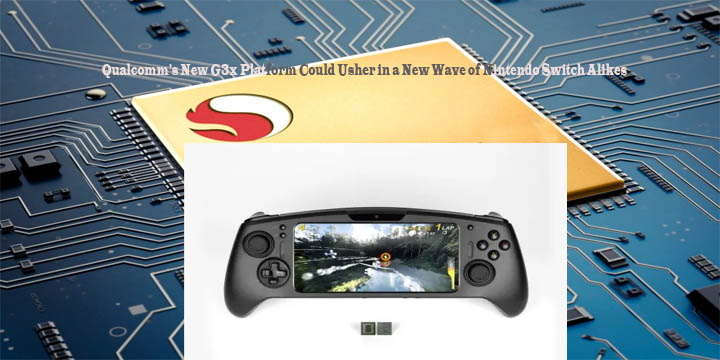 The Snapdragon G3x Gen 1 is an Android-based platform designed to let you play Android games, stream games from a console or PC, or play games via cloud gaming services.

In an article the verge said, the basis of the platform is the new G3x chip. It has an Adreno GPU, similar to Qualcomm’s existing smartphone chips, which will let you play games at up 144fps. It also supports sub-6Hz 5G, mmWave 5G, and Wi-Fi 6E for speedy networking.

If you want to connect G3x-powered devices to other screens, the chip supports output to a 4K display or tethering to a mixed reality headset over a USB-C port.

The G3x also includes the company’s Snapdragon Sound platform, which is designed to improve audio quality when you listen to music with supported wireless headphones.

Qualcomm Partnered With Razer on a Development Kit

To help sell its vision of what it thinks the G3x platform can do, Qualcomm has partnered with Razer on a developer kit device. (You may have already seen the device, which leaked on Tuesday.)

The handheld runs on the G3x chip, has a 6.65-inch OLED screen that supports 120Hz refresh rates, and has a 5MP webcam on the front so that players can Livestream their faces while playing a game.

Interested developers register to get the kit through Razer’s website starting Wednesday. But it’s not a Razer device, the company told The Verge. “This is not a Razer hardware announcement,” Justin Cooney, Razer’s director of global partnerships, said in a statement.

“The Snapdragon G3x developer kit is a Qualcomm device. Working together with Qualcomm in this collaborative partnership, we aim to bring more publishers and developers to the table and achieve our joint vision for creating the future of portable gaming.”

It’s unclear when we might see actual devices from other OEMs. “We’re really just focusing on the developer community right now,” Qualcomm’s Micah Knapp said in a briefing with reporters. “The devices are really up to the OEM in terms of when they can go out.”

Qualcomm has seen success with its AR / VR-focused XR platform, its XR2 chip powers Meta’s Quest 2 standalone VR headset. We just have to wait and see if the G3x ends up powering something similarly popular.

Razer, Qualcomm, and Verizon Are Manufacturing a Gaming Handheld