NZXT Introduces an $800 Gaming PC with No Dedicated GPU. The company has introduced an interesting pre-built PC for the age of the graphics card shortage, one that is powered by a Ryzen 5600G, a CPU with a built-in GPU that can soundly be used for gaming. 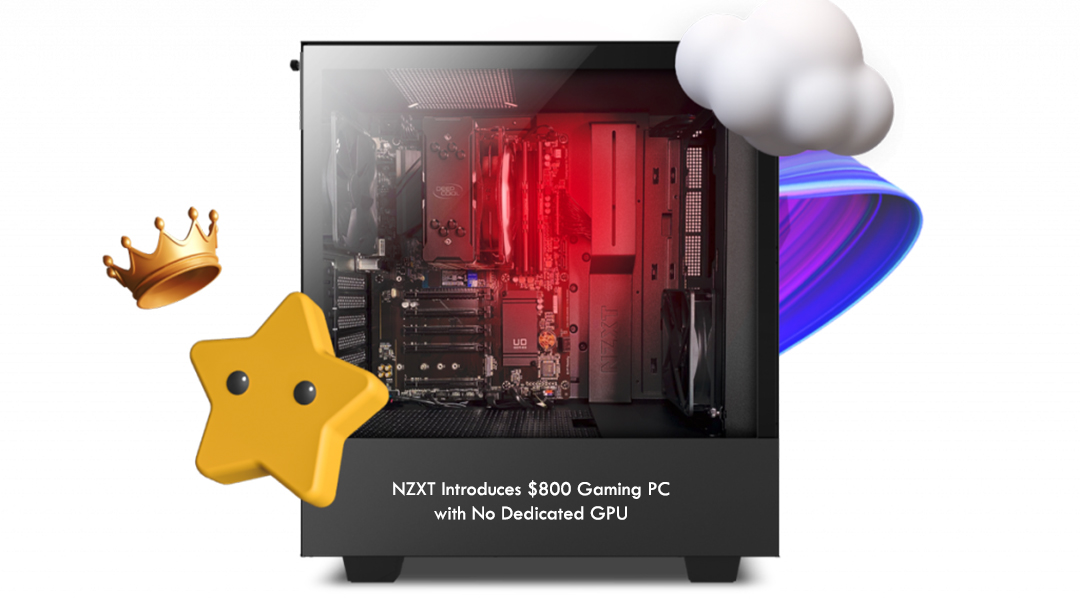 While, in normal circumstances, the NZXT’s $800 Foundation PC may not be the first choice for those wanting to get into PC gaming, its low availability and the inflated prices of dedicated GPUs make it an interesting option for budget-minded buyers.

According to the verge, the AMD processor/graphics card combo is actually the centerpiece of the build, but its other specs are also quite respectable: it comes with a 500GB NVMe SSD and 16GB of RAM.

And while its 650W Bronze power supply will not be winning any efficiency awards, it should be able to power something like an RTX 3060 if you are lucky or able to get your hands on one in the future.

Of course, having a dedicated GPU would really be preferable for almost any gaming scenario, that is why most vendors include one even the GTX 1650 included with the lowest-end HP Omen can outperform the 5600G’s graphics.

If you are shopping for one of those models, but, you’ll likely have competition, they can be a gold mine for scalpers, who will sometimes “shuck” a valuable GPU from a pre-built and sell the card and now-GPU-less PC separately (the $900 Omen’s Nvidia 1650 could sell for upwards of $300 by itself on eBay).

You do not have to search for gaming PCs on eBay for very long before you run into listings for the pre-builts with “NO GPU” or “without graphics card” in the title.

You Can Find a Decent Deal Buying the Scalper Leftovers

If you are an adventurous one and know what you are looking for, you could potentially find a decent deal by buying one of those scalper leftovers.

While the integrated graphics on modern Intel CPUs don’t match the power of the 5600G, it will let you at least be able to use your computer until you can find a GPU.

Whether you want to support someone who likely scalped a GPU or not is actually up to you though if you do go this route, have it in mind that the only desktop Ryzen CPUs that can be used without a dedicated graphics card is actually APUs that has a G at the end of the model name.

The foundation’s selling point may be that you can actually buy it. Since you can’t separate the 5600G’s graphics card and sell it for a markup, the Foundation may not be as enticing to scalpers, potentially preventing it from winding up constantly out-of-stock like many of NZXT’s other pre-builts.

Some manufacturers can at least mitigate concerns of scalpers snapping up their pre-builts by giving base models low-end GPUs that are not particularly desirable.

iBuyPower’s AMD Ryzen 3rd Gen Starter PC, for instance, comes stock with a Ryzen 3600 and an Nvidia GTX 1030 (which Tom’s Hardware says is a tad slower than the 5600G’s integrated graphics for most games).

But that configuration is almost $300 more than the NZXT, and even the CPU is going to be slower, iBuyPower will let you be able to upgrade to a 5600G, but then your 1030 could be next to useless.

If the 5600G’s relative uselessness to scalpers helps NZXT keep the Foundation in stock, it could as well be a good choice for those who do not wish to build their own PCs but would rather be comfortable slotting in a graphics card at some point in the future when they’re more readily attainable again.

Hopefully, it could inspire other vendors, too while some may currently let you equip the 5600G alongside an external graphics card, that configuration likely won’t be worth fighting scalpers for. Further research can be done on Google.