Do you know that the much-anticipated iOS 14 has been launched? If you didn’t know, now you do. This article, new iOS 14 features will be highlighting on some of the features that come with this new update and what users should be expecting to get. Therefore if you have an iOS device, this article is for you. With the release of the new iOS 14 come lots of new features and updates. Luckily for you, you don’t have to go far to learn of these new features as this article will be discussing some of the most important of these updates. 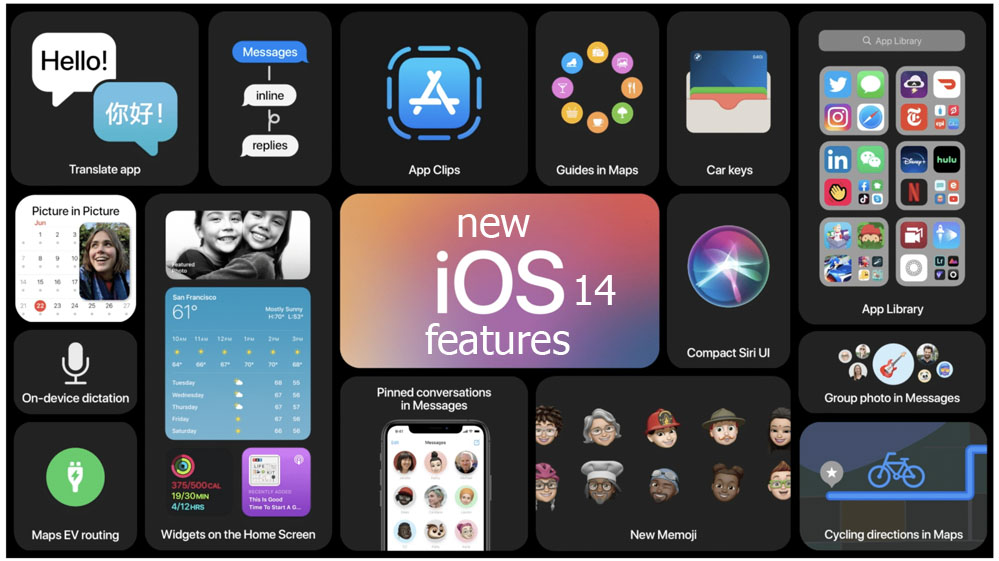 A lot of previous features with this OS were updated and some new features were added also. In this article just as I have mentioned already, I will be sharing with you some of these updates and features. So, strap on your seat belt as we delve into this incredible journey.

The new iOS 14 has added a new app library feature that aids in organizing all your apps in one place. Automatically apps are organized in the app library. There is also a new list view that you should be aware of. This view and feature lets you sort out applications based on their usage and many more.

The new OS adds the widgets feature to the home screen of iPhones and iPad’s for the very first time. Widgets here come in a verity of shapes and sizes and are richer in data than they actually used to. Accessing the widgets feature is easy as you can do this through the widget gallery. Apps on your device automatically move to make room for widgets.

Picture In Picture On iPhone

This new update provides support for the picture in picture feature. This feature works in a similar way to the iPad experience. Siri on the other hand has got a new interface and it does not overtake the entire screen.

The translator app is another feature to look out for also. The new translator app on this OS works completely offline and it is designed to for conversations. at launch, there are 11 languages supported. All you need to do to make use of this app is to tap on the microphone icon and the app on its end will help you translate to the language of your choice.

There is a new option in the control center that lets you measure headphone levels in real-time. If you have an apple watch, then you should know that this feature has a similar user interface to the apple watch noise app that measures the levels of noise in the environment instead of headphones.

Pieces of information found in the iOS 14 code reveals that the parent company Apple is working on a new method that will allow users to make payments with apple pay simply by scanning a QR code or a barcode with your device’s camera. This information was not announced at first meaning that it may not be available at first launch but it is very possible to feature later.

When you use the same password across multiple platforms online and one of them gets hacked, the iCloud keychain will be able to notify you via a feature about it. Personally, this is one of my favorite features of the new iOS 14 features.

The list of devices mentioned above is the ones compatible with this OS. Therefore if you have any of the devices above you can proceed to updating or installing the new OS to your device. If you don’t know about the installation and updating process continue reading.

How To Update Your Device To iOS 14 Or iPadOS 14

The steps are very easy, simple, and straight forward unlike that of android, where you will have to go through elaborate steps and processes. Note that when you update your device to iOS 14 or iPadOS 14, your device becomes more intelligent, personal, and even more private. To get the update on your device, firstly you will need to create a backup. You can back up your device to iCloud. And with this move, you get to have a copy of your most important pieces of information. After doing this, follow the steps below to install;

That’s it. You have just successfully updated your iOS device to the latest OS iOS 14. To learn more about the features of this operating system in full, go to Apple iOS 14 Features.