LG Display presents a versatile lineup of transparent OLED screens at CES 2022. LG Display is finally up with more uses for transparent screens and its innovative and fresh concepts that will be on display at CES 2022: the OLED Shelf, Shopping Managing Showcase, Show Window, and Smart Window. 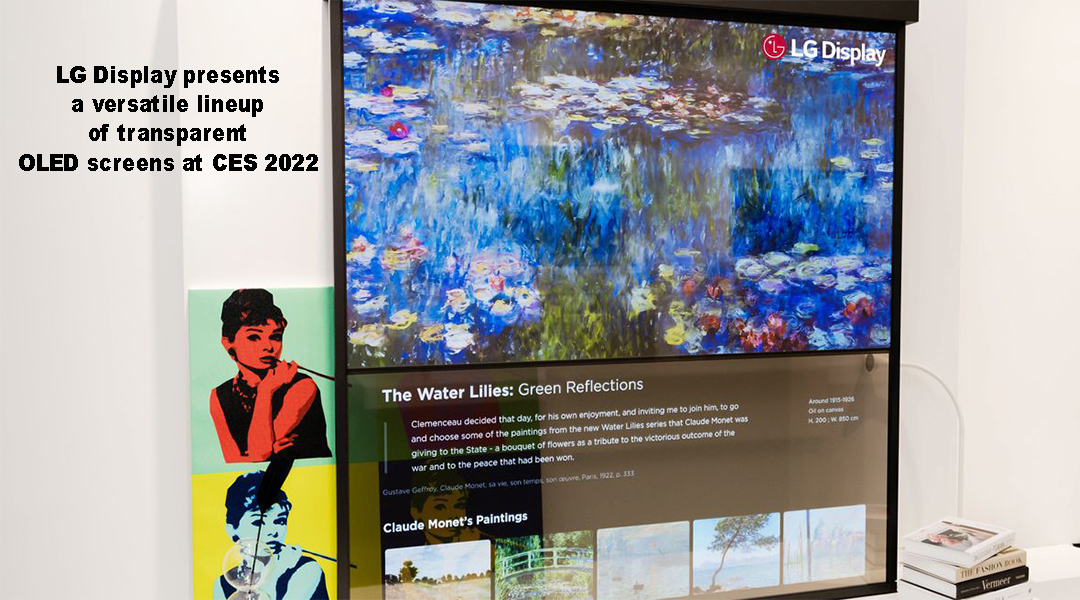 The company is not to be jumbled with LG Electronics, as LG Display simply creates concepts that other companies can adopt and introduce to the market.

The verge stated that the OLED Shelf, visible at the top of this story, comprises about two 55-inch transparent OLED displays that are mounted on top of one another, with a shelf at the very top.

LG Display says it’s ideal for the living room, where it can display art, a TV show, or one on each of the two screens simultaneously.

Always on Display Mode ensures that the screen can stay on all the time. If there was a piece of art on display, that image could stay put just like a painting, all while blending into the wall behind it.

There’s actually room for you to put an actual painting behind the screens, too, which you’d be able to see when they’re off.

LG’s also devised a motorized sheet of opaque material which rolls down like a projector screen to make their images more vibrant and less ethereal. (Images viewed on transparent screens can sometimes look ghostly.)

The pedestal you see in the image above houses some of the electronics, and the screens take standard HDMI input.

LG Display also gave us a glimpse of its Show Window, another business-focused model that consists of four 55-inch transparent OLED displays that could be used to play up products in window displays instead of window decals, stores could add digital text, which can easily be changed at any time.

The company says versions of it are already on display at the new Musinsa fashion store in Seoul, as well as art exhibitions at The Smithsonian and at 180 The Strand in London, inside some subway car windows in China and Japan, and a Bulgari fashion show.

The Company Also Showed Off Its Smart Window

The company also showed off its Smart Window, another transparent OLED screen that can be for video calls or presentations in the office, however, it didn’t provide any images of that display.

Since these transparent displays are just concepts, we probably won’t see many of them in the real world, but that doesn’t change the fact that they’re still pretty darn cool to look at and LG Display says it’s ready to help customers produce some of them if they want.

“If any of our customers want, we can provide [the OLED Shelf],” LG Display spokesperson Jean Lee tells The Verge, saying it’s ready for production.

All of these displays consist of the same 55-inch 1080p transparent OLED panels with 40 percent transparency, which Lee says is on the company’s 8th generation display manufacturing process.

LG Display has been in the transparent display game for a while now, revealing its first flexible and see-through screen in 2014, and more recently, it showed off a transparent TV screen mounted to the foot of a bed.

But it doesn’t just dabble in transparent screens the company is also showcasing its half-moon-shaped chair with a built-in OLED screen at CES this year.