Reports claim that 7 surveillance-for-hire operations are removed from Meta platforms. While it may just be that NSO groups get the most of the attention from the outcome, the removal of these operations just shows how insidious the industry has become over the years. 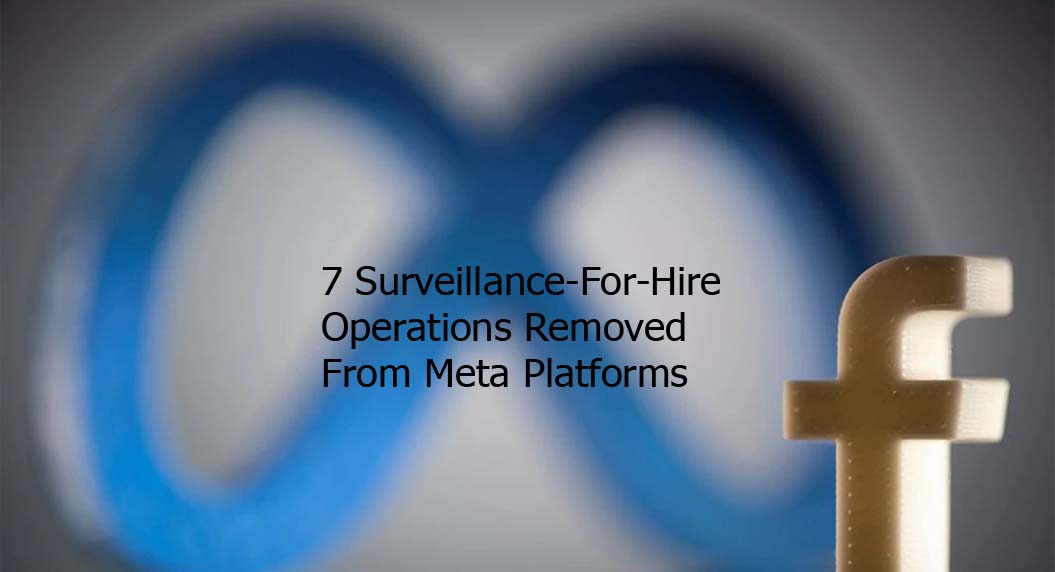 Surveillance-for-hire companies over the past years have used Meta’s platforms such as Instagram, Facebook, and WhatsApp as springboards in targeting over 100 countries.  And today, the parent company of Facebook and Instagram, Meta has removed seven of these companies from its platforms and the social media giants are also notifying people and users of over 50, 000 that they may have been impacted by the activity.

Meta also says that many of the affected people are journalists, dissidents, human rights activists, political opposition figures, and even clergy. The company also shared that other people that may be infected are simply everyday people such as someone who is a party to a lawsuit.

Extensive and vigorous account takedown and infrastructure dismantlement were carried out by meta on its platform as part of its action in curbing and managing the situation. The social media giants banned organizations and also sent them cease and desist warnings.

Meta confirmed that it is sharing its research and indicators of compromise generally in a bid that other security organizations and platforms can easily and better identify and manage similar activity. The findings of Meta show the reach of the targeted surveillance industry and also the massive scope of targeting it enables globally.

“Cyber mercenaries often claim that their services and their surveillance-ware are meant to focus on tracking criminals and terrorists, but our investigations and similar investigations by independent researchers, our industry peers, and governments have demonstrated that the targeting is in fact indiscriminate,” Meta’s head of security policy, Nathaniel Gleicher on a Thursday call with reporters said.

“These companies … are building tools to manage fake accounts, to target and survey people, to enable to the delivery of malware, and then they’re providing them to any clients who are most interested—the clients who are willing to pay. This means that there are far more threat actors able to use these tools than there would be without this industry.”

Meta confirms that these surveillance-for-hire firms conduct their work in three categories basically. And you can think of these categories as chains or phases.

The Phases Which the Surveillance for Hire Companies Operates

The first chain or phase is known as “reconnaissance”. This is where the firm widely collates information about its targets often via automated, bulk collection on the dark web and public internet.

The second phase is known as the engagement stage. This is where the operators reach out to their targets in an attempt to establish and also build a relationship with them. These surveillance companies set up fake profiles posing as grad students or even journalists in order to have an excuse in reaching out to targets. In their attempt, they may also share fake content and misinformation in order to build a relationship.

The final and third stage is the exploitation stage of hacking for hire stage. This is where actors exploit the trust of their victims in order to get them to provide information, download malicious attachments, click a malicious link, or even take on some other action.

Each of the stages can play out on a number of services and platforms. WhatsApp is a commonplace for example where malicious links are distributed to victims. Instagram and Facebook on the other hand is a natural ground for fake profiles.

Analysts at the University of Toronto’s Citizen Lab additionally distributed discoveries today taking a gander at Cytrox, explicitly, and its spyware is known as Predator. The scientists concentrated on two circumstances in which the Predator contaminated the gadgets of Egyptian casualties.

One is the banished legislator Ayman Nour, and different hosts an Egyptian news program and requested to stay unknown. Nour’s case is especially surprising, in light of the fact that his gadget was all the while contaminated with both Predator and Israeli spyware producer NSO Group’s infamous Pegasus product. An alternate government administrator controlled each piece of malware, Citizen Lab says.

The two targets were tainted with Cytrox’s Predator spyware in June while running the most recent adaptation of Apple’s iOS portable working framework, which was 14.6 at that point. Hunter got on their gadgets when they clicked pernicious connections shipped off them on WhatsApp.

“Although the technical sophistication of predator is definitely B-team compared to NSO’s Pegasus, the harm is still very much there,” senior researcher at citizen lab, John Scott-Rilton says. “The feeling of being a researcher investigating this stuff right now is that wherever you scratch you find it; whatever rocks you turn over you find it. Meta is talking about seven companies here. There are probably two dozen more that haven’t yet made it to the radar and haven’t been addressed. At the end of the day, the problem is deeply systemic and transcends a single company.”

The Effect of NSO Groups on Meta’s Platforms

In recent months, the NSO Group has been faced with increasing consequences for the invasive and aggressive nature of its hacking instruments and its lack of control over how they are deployed. Meta’s recent actions however show how widespread the surveillance-for-hire industry has become with plenty of similar anonymous companies still working on a large scale.

Meta’s researchers say that collaboration within the industry and working with a democratic government is very crucial in addressing this type of threat. Prioritizing focus on the spyware tools shared by NSO groups is very important. And also catching more of their activities is of value says Gleicher ideally before malware ever actually gets to the devices of victims.