The Japanese billionaire launches to the International Space Station while he’s said to be waiting for the SpaceX Moon ride. 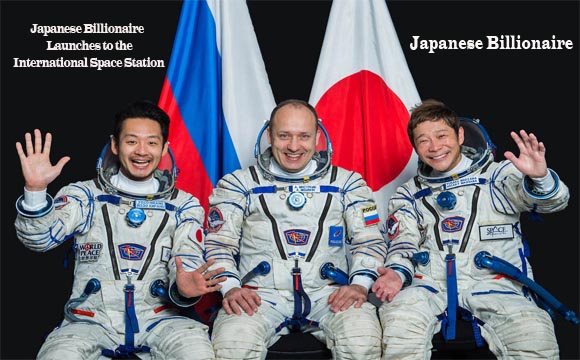 Three new spacefarers have been said to have launched to the International Space Station this morning, a crew consisting of a Russian cosmonaut and two other Japanese space tourists.

One of the tourists on board was said to be Yusaku Maezawa, a Japanese billionaire who announced his intention a few years back to fly around the Moon on SpaceX’s future Starship rocket one day.

The verge said the trio lifted off on top of a Russian Soyuz rocket from Kazakhstan at 2:38 AM ET, docking with the space station around six hours later at 8:40 AM ET.

Maezawa’s crewmates include Russian cosmonaut Alexander Misurkin and Japanese tourist Yozo Hirano, who is Maezawa’s producer and manager. The group is slated to spend roughly 12 days on the ISS before heading back to Earth on December 19th.

Their trip is part of Russia’s re-emergence into the world of orbital space tourism. The flight comes just two months after Russia launched a Russian actress and director to the ISS to film scenes for an upcoming movie called The Challenge.

Meanwhile, Maezawa and Hirano are flying to the ISS through a partnership with Space Adventures, a company that brokers trip to space for interested tourists. The company helped orchestrate trips to the ISS for seven people in the early 2000s on Russia’s Soyuz spacecraft.

However, it paused flights after the retirement of NASA’s Space Shuttle in 2011, as the space agency needed seats on Russia’s Soyuz rockets to get US astronauts and international partners to the ISS.

With the help of Space Adventures, Maezawa went through training in Russia’s Star City to help prepare for his flight. Maezawa plans to film his time on the ISS with the help of Hirano and post videos of his adventures on his YouTube channel.

Before his flight, Maezawa also came up with a list of “100 things to do in space,” according to Space Adventures. One of the items he hopes to do on his list is played badminton with Misurkin.

Maezawa, who made his fortune through an online fashion retail business called Zozotown, has already made his interest in spaceflight well known.

The billionaire announced in 2018 that he had purchased a trip around the Moon on SpaceX’s future Starship rocket, a vehicle the company is building to take people to the lunar surface and Mars someday.

For that mission, dubbed Dear Moon, Maezawa plans to bring up to eight people with him along for the journey.

Originally he had hoped to bring all artists with him, but in March, he launched a contest to allow anyone around the world to apply to fly with him, “to give as many talented individuals as possible the opportunity to go.”

Maezawa also announced plans in 2020 to film a dating reality show to find a girlfriend to go to space with him, but that idea was eventually abandoned.

SpaceX’s Starship Rocket Has Yet to Fly to Orbit

In July, Maezawa posted a video of some of the filmed applications sent to him by people who were interested in flying around the Moon with him. In the video, he said his team was in the final stages of screening to pick the finalists.

Meanwhile, SpaceX’s Starship rocket has yet to fly to orbit. The company has flown prototypes of the rocket to high altitudes above the Earth and attempted to land them back on the ground. Only one of those prototypes has been able to stick the landing without exploding afterward.

SpaceX is working toward its first orbital launch in either January or February 2022. Even if that is a success, there are still plenty of milestones the company must achieve before it can safely fly people to the vicinity of the Moon and then land them back on Earth.

With Starship’s timeline somewhat dubious, this trip to the ISS is a much speedier way for Maezawa to get his space fixed while he waits. Maezawa and his crew will join two Russian cosmonauts, three NASA astronauts, and a German astronaut from the European Space Agency who are already living on the ISS.