iOS users have been searching on How to use Apple Music on Mac. Apple Music is one of the most popular music streaming services around the world. 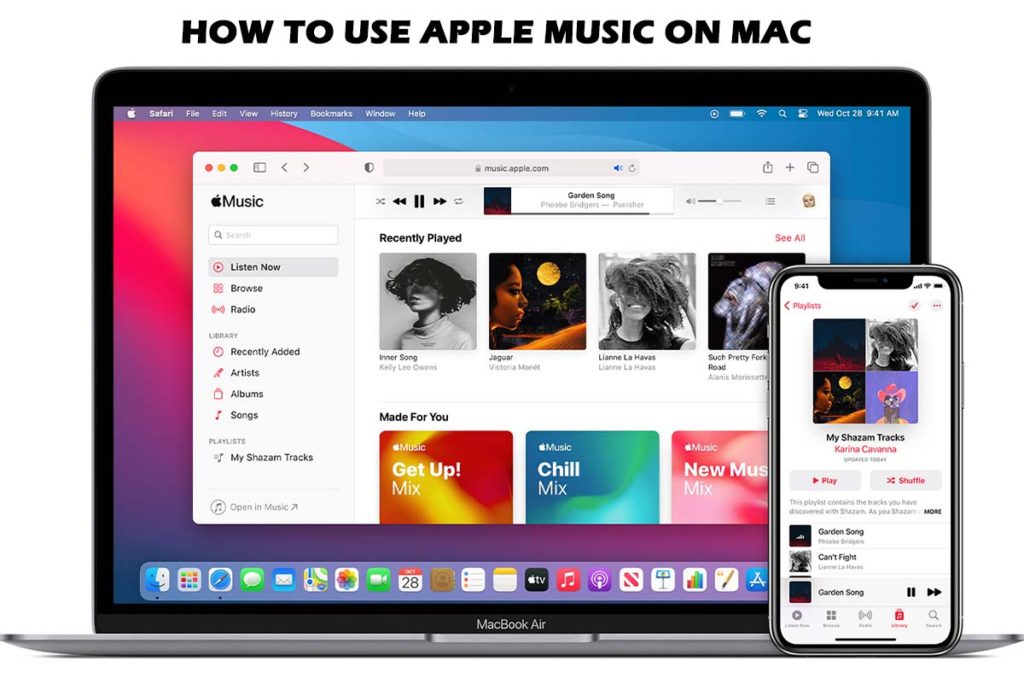 Though you may spend most of the time hearing your favorite tunes on your iPhone, iPad, or Apple TV. The service is additionally available on other devices, including Macs.

How to use Apple Music on Mac

Apple Music is a built into the Music app which was formerly called iTunes. Access to Apple Music on Mac allows you to hear millions of songs from the service’s catalog.

Signing up for Apple Music on Mac

If you are not already an Apple Music subscriber, you’ll become one in the macOS Music app. To subscribe to this service, click on the Music app on your computer, then choose Account. Now you can join Apple Music from the menu bar.

Follow the directions on the screen, which include signing into your Apple ID. If you do not have an Apple ID, you will have to create one during the setup process.

The Music app on Mac is as well where you will find iTunes music purchases and other audio content. This iTunes Store is also within the Music app in macOS Big Sur.

Apple Music content is split into three main sections on Mac: Listen Now, Browse, and Radio. There’s also a search box located at the top left of the Music app.

Use the ‘Search’ box to search out music. Use it quickly to change between searching your own music library and also the Apple Music catalog. Search by lyrics, browse categories and find suggestions as you type.

In the Apple Music app, click ‘Listen Now’ on the left side of the app. Under this section, you will find a mixture of historical and recommended content that changes over time and often, based on your listening patterns.

Under ‘Listen Now’, you will find different subsections, including ‘Top Picks’, ‘Recently Played’, ‘Made for You’, etc. ‘Top Picks’ includes a bit of everything, like playlists, new albums, and favorite artists.

‘Recently Played’ is where you will find quick access to the songs and albums you played last. ‘Made for You’, meanwhile, offers links to Apple-created mixes that change weekly.

Each playlist includes a pleasant mixture of favorite and recommended tunes associated with the playlist subject. Current Apple Music mixes are ‘Get Up!’, ‘Chill’, ‘New Music’, ‘Friends’, and ‘Favorites’.

Scrolling down, ‘Listen Now’ includes additional content largely depending on your listening habits, new music, and time of day or year.

Under ‘Stations for You’ are radio stations automatically created depending on your favorite songs, artists, and playlists. There’s also music arranged by category.

The ‘Listen Now’ section ends with Apple Music ‘Replays’. Apple offers a running list of your most listened to songs for every year you have been subscribed to Apple Music. A ‘Replay’ for the present year is shown first.

Under ‘More to Explore’ are additional links, including music videos, charts, and music by category. Below ‘Browse’ is as well the Apple Music ‘Daily Top 100’ listings. From here, you’ll find the best top 100 songs in an ever-growing list of countries around the world.

When the iPhone maker first launched Apple Music in 1995, one of its biggest selling points was the ‘Beats 1’ radio channel.

‘Apple Music 1’ is not the only Apple Music radio station. There’s also the 24/7 ‘Today’s Music’, and ‘Music Country’.

Playing content requires clicking on that. Active content is shown within the Music Player at the top section of the Music app on macOS. From here, you’ll be able to play/pause and fast forward/rewind content.

Most of Apple Music’s magic happens behind the scenes once you right-click on content to point out a new menu.

What to Wear to An Interview as A Man