“Google Home’s Assistant vs Amazon Echo’s Alexa”. Have you ever considered between Google Home’s vs Amazon Echo’s Alexa? Both devices are smart devices produced under the company Google and Amazon. They both offer voice controls as well as other unique features that a user would want in a smart speaker. Sounds are perfect in both, and costs differ. Considering buying either among the two? Then read more on this detailed article to understand better on either device. 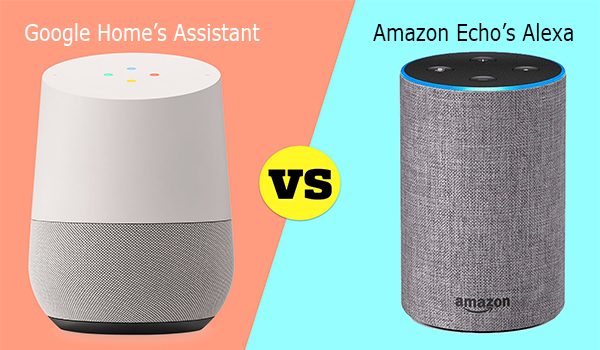 Speaker buyers all want the very best choice of speaker to purchase. And this brings us to how we can differentiate between two smart speakers; Google Home’s Assistant vs Amazon Echo’s Alexa. Selecting from either of these smart speakers is the right choice as they both have some similar helpful features. The smart AI voice inside the devices is both fast becoming useful and smarter with each upgrade. With this, users can get to set timers, alarms, control either devices all with spoken voice commands.

Yes, I know that these smart speakers are at the center of most smart homes, but is the Amazon Echo or the Google Home the right one for you? Below are the differences between these two devices.

Both devices as said earlier have a voice control access which can be used to operate the device while far from it. With a base level of command available to either device on “Hey Google” or “Hey Alexa” wake command, control of the device digital world is just a tip of your vocal cords away.

Google Home abilities by defaults include barring paring up a third-party smart home device with your Google Home system. If you make a request that the Google ecosystem understands, then it will carry out the requested operation unprompted.

While Alexa relies on the installation of skills which are individual app-like sets of related voice commands focused on certain topics or abilities. It is operated through the Alexa app on smartphones and this range from getting information on local transport times or activating voice control games.

Both devices come with different sound performance across both ecosystems. If music is your top priority, then I urge you to go for the Google Home Mini which sounds better than the Echo Dot. Even the new Google Nest Mini is set to sound even better too.

Looking for an Echo speaker, your best shot should be the Echo Spot not to talk bout size provides the best sound quality. Google Home is too bass heavily to be truly enjoyable.

Users going for a pure sonic superiority between the Google Home and Amazon Echo ranges, I’d suggest you opt-in for Google Home Max. It has a well-tuned bass, and its top volume levels loud without verging into the highly distorted territory.

Both devices have a wide range of prices as it both offers several models. Amazon, offering a wide spread of options; both affordable and expensive prices points out between either smart speakers. This is with Echo Dot at the lower end and screen packing Echo Show at the high top.

The buyer’s choice should depend on the preference of the ecosystem as opposed to the hardware. If you are interested in Google’s service, then Google Home is there to provide you a well-defined smart speaker. Otherwise, in terms of sheer value for money and the already vast of its activities and abilities, Amazon Alexa devices seem to be more sensible at this stage.

But either way, getting either a Google Home or an Amazon Alexa won’t be a disappointing choice, because they both have this unique smartness which they are worth for.

For more information, you should check https://www.cnet.com/news/