The new Fortnite Alien Invasion with Operation Sky Fire is set to take place on the 12th of September 4, 2021. Ever since the current season of Fortnite which was debuted in June, there has been a promise of massive conflict with a group of aliens. The developers of the game are finally teasing this big event in the big live event “Operation Sky Fire”. 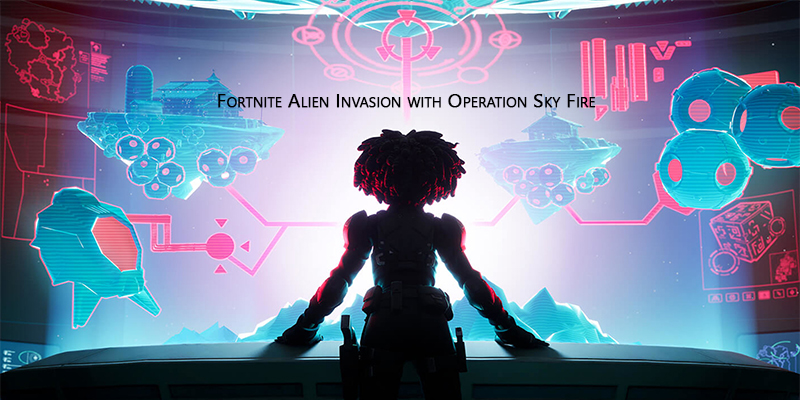 According to The Verge, the live event will take place on the 12th of September at 4 PM ET. The developers of the game say that players will join a strike team and sneak aboard the mothership to deliver IO’s final message to the invading aliens. Also, it is going to be a one-time-only thing and if you miss it, you are going to have to catch up on YouTube. The Epic always does, they are recommending that players log in to their account early so they can get a spot.

Since the original rocket launch of Fortnite in 2018, these kinds of live events have been a highlight of the game. Players have witnessed the erupting of Volcanoes, battling giants, the infamous black hole, a flood, and even participated in a battle with Marvel supervillain Galactus. The game developers have even gone far as to experiment with single-player events.

These upcoming alien events have been teased for some time with a giant mothership hovering quietly over the Fortnite island for months. Several locations have also been destroyed by the invasion.

This huge event will also mark the end of season 7 of Fortnite. This means that if you still have battle pass characters to unlock or gold bars to spend, you would want to do it before September 12th. Take note that outside of the aliens, this season has featured some notable Fortnite moments including the Ariana Grande concert series and the addition of a controversial mode called impostors.