Elon Musk Tells Tesla Employees to Stop Rushing to Increase Quarterly Deliveries. In a recent memo, Tesla CEO Elon Musk has told the company’s employees to not sprint to make deliveries by the end of this quarter, and to instead focus on minimizing costs, CNBC reports. 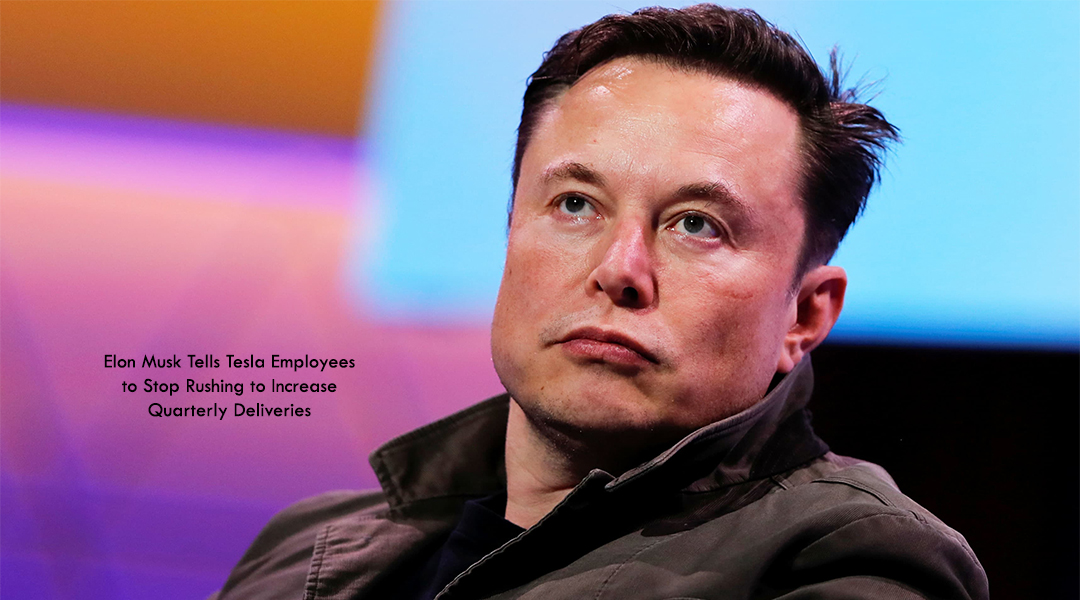 In the November 26th memo, Musk wrote that he doesn’t want the company “spending heavily on expediting fees, overtime and temporary contractors just so that cars arrive in Q4.”

“What has happened historically is that we sprint like crazy at end of the quarter to maximize deliveries, but then deliveries drop massively in the first few weeks of the next quarter,” said Musk.

“In effect, looked at over a six month period, we won’t have delivered any extra cars but we will have spent a lot of money and burned ourselves out to accelerate deliveries in the last two weeks of each quarter.”

According to the verge, the memo was sent a little over a month after Tesla was able to increase its global deliveries to over 241,000 in its latest quarter, despite global supply chain issues and a chip shortage that’s hit sales from other automakers like General Motors and Ford.

CNBC notes that Tesla hasn’t released a clear delivery target for 2021, but that it loosely aims to increase deliveries by around 50 percent on an annual basis.

It delivered 500,000 vehicles in 2020 and has already reported delivering 627,350 in the first three quarters of 2021. In this context, it looks like there’s less of a need for Tesla to rush to hit its targets.

Tesla and Its Delivery Challenges

Tesla hasn’t faced any delivery challenges this year. In August, CNBC reported that some customers had seen their cars delayed by weeks or months due to parts shortages and manufacturing challenges at its Fremont plant.

There were also reports this month of delivered cars missing features like USB ports, apparently as a result of the global chip shortage.

Electrek notes that this may not have been the first time Musk has told employees to focus on costs over delivery targets, but that the practice has nevertheless persisted within the company.

This reportedly creates intense end-of-quarter pressures at Tesla, increases costs, and can lead to customers being rushed to take delivery of their cars.

In his recent memo, Musk goes on to say that the company is expecting to experience a large delivery wave at the end of December, as shipments from California and China reach the east coast of the US and Europe respectively.

But the CEO wants to reduce the size of these waves in the future, “in favor of a steadier and more efficient pace of deliveries.”

“The right principle is taking the most efficient action, as though we were not publicly traded and the notion of ‘end of the quarter’ didn’t exist,” he wrote.