The major similarity between Chromebook vs MacBook is that they are both laptops. After that, it gets pretty divergent. Chromebooks tend to be underpowered and limited to web-based app, but they are really quite affordable. MacBooks on the other hand are far more powerful and more capable but pretty expensive. It really comes down to your needs for the machine. 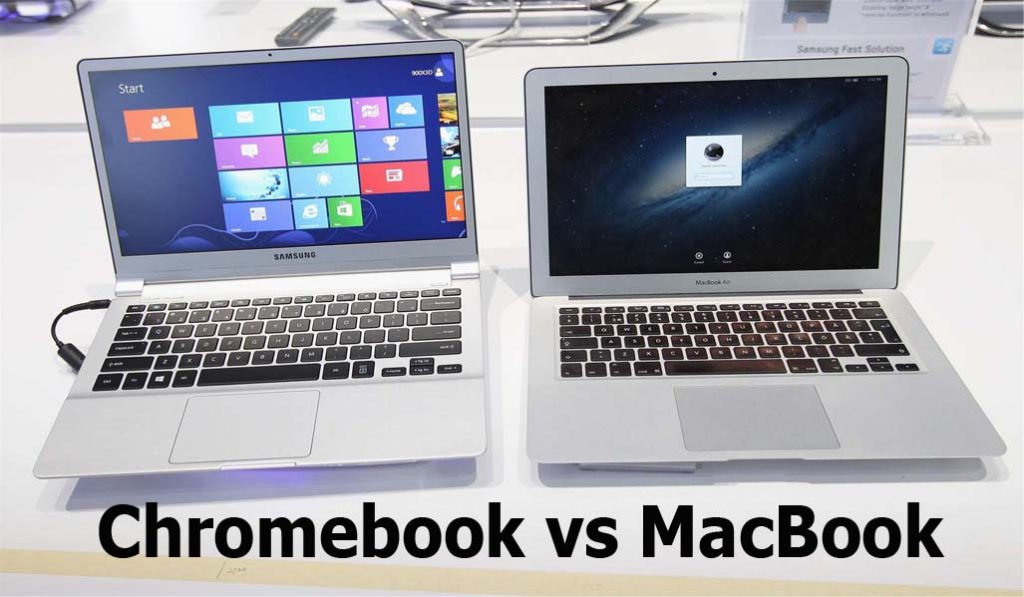 It’s a bit difficult to compare Chromebook vs MacBook. This is because they come from such different directions and don’t necessarily target the same audience.

Chrome OS is an operating system any manufacturer can use. And dozens of manufacturers make their own Chromebooks to their own specifications. MacBooks, on the other hand, are only available from Apple.

The biggest differences are Chrome OS is web-based and far more basic than macOS. And Chromebooks are highly focused on web apps like Google Docs.

In comparison, MacBooks are capable of running all macOS apps and don’t require an internet connection to perform vital functions.

For performance and productivity, MacBook wins to most of Chromebooks. Performance is a category that will vary widely depending on what kind of Chromebook.

On balance, MacBooks tend to have more powerful hardware and corresponding better performance than Chromebooks. If only because low-end budget Chromebooks weigh down the average.

You can find Chromebooks that come with impressive hardware under the hood. But they are quite expensive and not exactly the norm.

Chromebooks are great if you’re deep in the Google ecosystem and don’t really need anything but Google Docs and other web apps.

But a MacBook is just the better choice if you need to do any heavy lifting. For example, if you want to do tasks like video and photo editing on your laptop, you will have a better experience on a MacBook.

It’s worth noting that power users can get a lot more out of a Chromebook. With the option to install Android apps or switch to a full Linux desktop environment.

The catch is that you’re still limited to Linux apps. So, that is only a good option if the apps you require are available for Linux.

Design and Portability – Chromebook vs MacBook

MacBooks run away with this category, with hardware that’s both super portable and nice to look at. Some of the higher-end Chromebooks, like the Google Pixelbook and Samsung Galaxy Chromebook, are well designed and solid to stand out usage.

But most Chromebooks fall on the utilitarian end of things. They tend to be thicker and heavier than comparable Apple products, with chunkier bezels and shorter battery lives.

Since Chromebooks are largely cloud-based, portability depends on your access to the internet. Your files being in the cloud is very convenient on the whole.

MacBooks don’t rely on internet access, which makes them more useful in more situations. However, lower-end models can have disappointingly small hard drives. So, keep that in mind if you have a lot of big files you need to carry around.

Apple doesn’t really offer any low-cost MacBooks. So, anyone looking for an entry-level or budget-priced option has no choice but to buy a used model.

Chromebooks, on the other hand, have options for every budget. The cheapest Chromebooks tend to be a bit cheaper than even the most affordable Windows laptops when you look at devices with comparable hardware.

If you’re looking for a budget-priced laptop, then your money will go a lot further with a Chromebook than a MacBook.

While the most affordable MacBooks are a bit cheaper than the most expensive Chromebooks. Apple makes no attempt to compete cost-wise with budget and entry-level models.

Chromebook vs MacBook don’t really compete for the same market segment. So, it is pretty easy to decide which one you need.

If you’re working on a tight budget, or your requirements are quite basic and undemanding. Then an affordable Chromebook model is exactly what you’re looking for.

If you have a higher budget, and you’re looking for a laptop that can get more intensive work done wherever you are, a MacBook is the better choice.

There are exceptions, and power users can get a whole lot of extra value out of Chromebooks by running Android and Linux apps. But Chromebooks are more aimed at people who are just looking to surf the web, send email, stream music, and work in Google Documents.